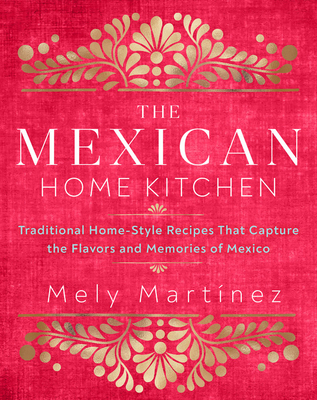 By Mely Martínez
$28.00
Not In Store / Available To Order (allow for shipping time to bookstore or direct-to-home)

Mely Martínez started her blog, Mexico in My Kitchen, in 2008 for her teenage son, hoping that someday he will use it to recreate the Mexican food his mom made for the family. Mely was born and raised in the city of Tampico, Tamaulipas, and started helping in the kitchen at a very young age, since she was the oldest daughter of eight children. She and her siblings spent summers at her grandmother’s farm in the state of Veracruz, where part of the daily activities included helping to grind corn for making masa and gathering firewood for the woodburning stove. At the age of twenty, Mely moved to southern Mexico, where she worked as a teacher. This job gave her the opportunity to travel to all the states in the Yucatán Peninsula, and enjoy their excellent and unique cuisine. Throughout the years, she lived in other states in Mexico, and has traveled to most of them. By now, she had moved more than twenty times! Mely enjoys cooking classic meals that are eaten every day in Mexico, and sharing them with her followers around the world. Her recipes are created from knowledge gained throughout her studies, travels, and life experiences. She lives in Dallas, Texas.
.

“Mely’s book is filled with memories that capture the essence of Mexican home cooking. Its recipes are the ones that I was brought up with, and are a fundamental part of our culture.”
- Adrian Herrera, chef, judge of MasterChef Mexico, owner of Fonda San Francisco and Paso Del Norte—-

“Mely’s way of understanding Mexican home cooking manages to transmit the culinary heritage of our Mexico, and exalts it with both simplicity and sophistication. There is no doubt that with her recipes, we can taste the Mexican identity.”
- Lula Martin del Campo, chef, author, and owner of Cascabel restaurant—-

“This book takes me back to my own mother's cooking, touching my corazón Mexicano. From the northern region’s flour tortilla to the south’s complex and elegant mole, this book offers it all, beautifully laid out and with easy-to-follow recipes. A real standout in the world of Mexican cookbooks.”
- Silvana Salcido Esparza, James Beard Award nominated chef and owner of Barrio Cafe—-

“I have always admired the culinary work of Mely, her passion for food, and the love she has for the Mexican gastronomy. This book will touch hearts with every one of its recipes, filled with stories, traditions, and a burst of Mexican flavor.”
- Omar Sandoval, chef, TV personality, author, and founder of the Sacchi Academy of Culinary Arts—-