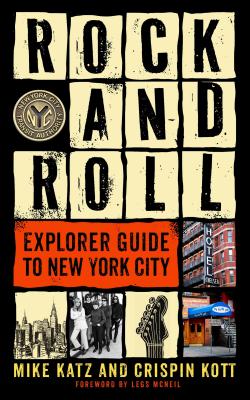 Mike Katz was born in Atlanta, came of age in New Orleans, and eventually (or perhaps inevitably) found a home in New York City. Along the way, he has been an obsessive music fan, voracious reader, history buff, bookseller, and accomplished photographer. The Rock & Roll Explorer Guide is his warped love letter to this beautiful, dirty town. Crispin Kott was born in Chicago, raised in New York, and has called everywhere from San Francisco to Los Angeles to Atlanta home. An avid music enthusiast and failed drummer, he's written for numerous print and online publications, and has shared with his daughters Madeline and Marguerite a love of reading, writing and record collecting. As a longtime Brooklyn resident, Crispin has been able to indulge in his love of Rock & Roll of the past, present, and future.