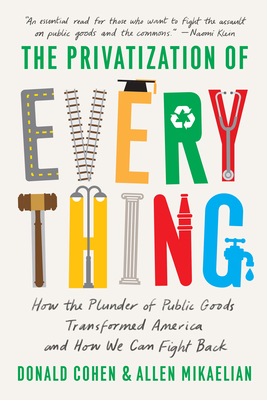 "An essential read for those who want to fight the assault on public goods and the commons." --Naomi Klein

A sweeping expos of the ways in which private interests strip public goods of their power and diminish democracy, the hardcover edition of The Privatization of Everything elicited a wide spectrum of praise: Kirkus Reviews hailed it as "a strong, economics-based argument for restoring the boundaries between public goods and private gains," Literary Hub featured the book on a Best Nonfiction list, calling it "a far-reaching, comprehensible, and necessary book," and Publishers Weekly dubbed it a "persuasive takedown of the idea that the private sector knows best."

From Diane Ravitch ("an important new book about the dangers of privatization") to Heather McGhee ("a well-researched call to action"), the rave reviews mirror the expansive nature of the book itself, covering the impact of privatization on every aspect of our lives, from water and trash collection to the justice system and the military. Cohen and Mikaelian also demonstrate how citizens can--and are--wresting back what is ours: A Montana city took back its water infrastructure after finding that they could do it better and cheaper. Colorado towns fought back well-funded campaigns to preserve telecom monopolies and hamstring public broadband. A motivated lawyer fought all the way to the Supreme Court after the state of Georgia erected privatized paywalls around its legal code.

"Enlightening and sobering" (Rosanne Cash), The Privatization of Everything connects the dots across a wide range of issues and offers what Cash calls "a progressive voice with a firm eye on justice that] can carefully parse out complex issues for those of us who take pride in citizenship."

Allen Mikaelian is a New York Times bestselling author. He lives in Washington, DC. Donald Cohen is the founder and executive director of In the Public Interest, an Oakland, California-based national research and policy center that studies public goods and services. His opinion pieces and articles have appeared in the New York Times, Reuters, Los Angeles Times, and the New Republic, among others. He lives in Los Angeles.