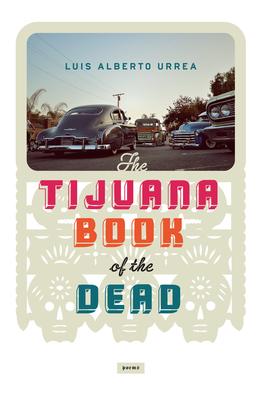 From the author of Pulitzer-nominated The Devil’s Highway and national bestseller The Hummingbird’s Daughter comes an exquisitely composed collection of poetry on life at the border. Weaving English and Spanish languages as fluidly as he blends cultures of the southwest, Luis Urrea offers a tour of Tijuana, spanning from Skid Row, to the suburbs of East Los Angeles, to the stunning yet deadly Mojave Desert, to Mexico and the border fence itself. Mixing lyricism and colloquial voices, mysticism and the daily grind, Urrea explores duality and the concept of blurring borders in a melting pot society.

Luis Alberto Urrea, 2005 Pulitzer Prize finalist for nonfiction and member of the Latino Literature Hall of Fame, is a prolific and acclaimed writer who uses his dual-culture life experiences to explore greater themes of love, loss, and triumph. Born in Tijuana, Mexico to a Mexican father and an American mother, Urrea has published extensively in all the major genres. The critically acclaimed and best-selling author of 13 books, he has won numerous awards for his poetry, fiction and essays, and his work has been featured in The Best American Poetry series. Urrea lives with his family in Naperville, IL, where he teaches creative writing at the University of Illinois-Chicago.

"A gorgeous, engaging collection . . . [Urrea] captures the song and spirit of people who might otherwise be invisible . . . As difficult as the subject matter may be, the writing is radiant, showing how the worth of human beings can’t be dimmed by a border fence or hot-button politics."—Washington Post

"Urrea’s facility with language (he writes in English and Spanish, at times in the same poem) and with sound is absolutely striking . . . Readers won’t dispute Urrea’s storytelling ability, as many of these poems are efficiently packaged narratives of seemingly real people at the real border, burdened with desire and pain and oppression, and even routine; nor will they be able to dispute this book’s tremendous, thumping heart." —Library Journal

"He has an undeniable technical skill and his poems move adroitly through rich images, using physicality to make history (personal, cultural, and national) immediately present....Urrea displays accomplished movement in tight, driving narratives and poems that end with disarmingly succinct and arresting lines....[T]he book includes many moments of touching insight and poems that readers will rightfully celebrate." —Publishers Weekly

"This most recent book of poems pays homage to the bloodshed and homicide that has become a hallmark of American drug wars, transporting readers from the vast expanse of the Sonoran Desert to urban decay in downtown Chicago. [Tijuana Book of the Dead] oscillates between brutal ultraviolence ... rapturous beauty ... and fanciful whimsy....Peppering lyrics with shoe polish, hair tonic, and wood varnish, Urrea echoes originators of Latino literature, such as Luis Valdez and Lalo Delgado, bridging literary generations in unflinching, evocative verse." —Booklist

“An award-winning poet, fiction writer and essayist, Urrea should be required reading for anyone living in the Southwest. Pure Urrea means being part Mexican, part Indian and part gringo. Reading his work means getting lost in stories that have both fable-like romance and visceral hopelessness, in voices that shift beautifully from sharp and quick-witted to meditative and soft.”—San Diego Union Tribune