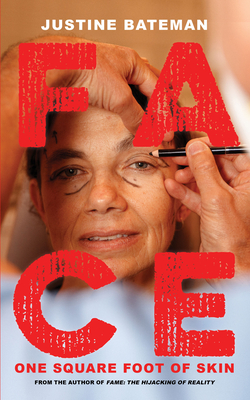 Writer/director/producer Justine Bateman examines the aggressive ways that society reacts to the aging of women's faces.

Face...is filled with fictional vignettes that examine real-life societal attitudes and internal fears that have caused a negative perspective on women's faces as they age.
--The TODAY Show, a Best Book of 2021

With her new book Face: One Square Foot of Skin, Justine Bateman...is trying to push back against the notion that women's faces are 'broken and need to be fixed'...The book is a meditation on women's faces, and the cultural pressure to be 'ashamed and apologetic that their faces had aged naturally.'
--New York Times

Bateman] studies the topic of women and aging in her new book Face: One Square Foot of Skin.
--People

There is nothing wrong with your face. At least, that's what Justine Bateman wants you to realize. Her new book, Face: One Square Foot of Skin, is a collection of fictional short stories told from the perspectives of women of all ages and professions; with it, she aims to correct the popular idea that you need to stop what you're doing and start staving off any signs of aging in the face.
--W Magazine

The actor and author of Face: One Square Foot of Skin wants to push back against the ubiquity of plastic surgery.
--Vanity Fair

Justine Bateman extends her creative talents to include fiction in this collection of vignettes that focus on how we've learned to react to women's faces as they age. Based on Bateman's own real-life interviews, the stories dig deep to uncover why we're uncomfortable with faces of a certain age, and argue that confidence--and not cosmetic procedures--are the answer to the problem.
--Town & Country, one of the Best Books of Spring 2021

Through a selection of short stories, Bateman] examines just how complicated it is for women to get older, both in and out of the spotlight.
--Glamour

Bateman asks, what if we just rejected the idea that older faces need fixing. What if we ignored all the clanging bells that remind women every day on every platform that we are in some kind of endless battle with aging.
--TIME Magazine

Bateman] argues that American society has long equated the signs of aging on a woman's face with unattractiveness. But she also asserts that women need not participate in such prejudice by accepting and internalizing it.
--AARP

Right on, Justine Bateman. Thanks for helping us embrace our faces just as they are.
--Upworthy

It's been a long time since I read something that made me want to stand up and cheer.
--ScaryMommy

Face is a book of fictional vignettes that examines the fear and vestigial evolutionary habits that have caused women and men to cultivate the imagined reality that older women's faces are unattractive, undesirable, and something to be fixed.

Based on older face experiences of the author, Justine Bateman, and those of dozens of women and men she interviewed, the book presents the reader with the many root causes for society's often negative attitudes toward women's older faces. In doing so, Bateman rejects those ingrained assumptions about the necessity of fixing older women's faces, suggesting that we move on from judging someone's worth based on the condition of her face.

With impassioned prose and a laser-sharp eye, Bateman argues that a woman's confidence should grow as she ages, not be destroyed by society's misled attitude about that one square foot of skin.