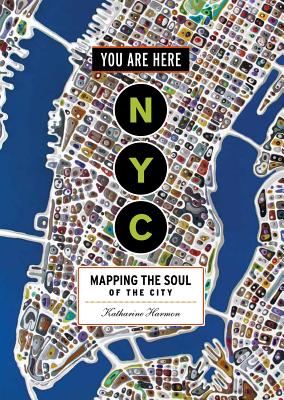 Maps are magical. Every graphic, like every story, has a point of view, and New York is rife with mapmaking possibilities, thick with mythology, and glutted with history. You Are Here: NYC assembles some two hundred maps charting every inch and facet of the five boroughs, depicting New Yorks of past and present, and a city that never was.

"A Nightclub Map of Harlem" traces a boozy night from the Radium and the Cotton Club to the Savoy and then the Lafayette; "Wonders of New York" pinpoints three hundred sites of interest, including the alleged location of Captain Kidd's buried treasure; the Ghostbusters subway map plots the route from Astral Projections Place to Stay Puft Street; and a rejected proposal of ornate topiaries illustrates a Central Park that might have been. This sequel to the best-selling You Are Here includes original essays by Bob Mankoff, Maria Popova, Sarah Boxer, and Rebecca Cooper, among others.

Katharine Harmon is the author of two successful books: You Are Here (Fall 2003) and The Map as Art (Fall 2010). Harmon has contributed essays to catalogs and publications, and co-curated shows in New York, Seattle, and London. She has spoken frequently on the topic of creative cartography, including at academic conferences.

"The maps are concerned much more with the psychic quality of a city than the physical topography--a type of map Harmon has seen on the rise over the past decade, even as big data and Google Maps have made precision mapping easier than ever. These maps aren't wayfinding tools--GPS apps have that covered. Rather, they're alternate ways of seeing a city." - Fast Co. Design

"A 1908 map of the pneumatic telegram service, a 1950s proposed subway bomb shelter map and an interactive walking tour plan with attractions that existed in Manhattan 400 years ago (think forests and swamps) are a few of the unexpected treasures that lovers of cartography will discover in You Are Here: NYC." - Forbes

"What a find! You Are Here: N.Y.C. provides a delightfully ingenious perspective on territory that most readers might view as familiar. Witty essays by Sarah Boxer, Bob Mankoff, Maria Popova, and others accompany a four-century cartographical treasure chest that includes Andy Warhol's Central Park, Saul Bellow's "View of the World from Ninth Avenue," a 1950s proposed subway bomb shelter, the 1908 pneumatic telegram service, a pigeon's aerial view, and a map made up of newspapers dated Sept. 11, 2001." - The New York Times

"Exploring [the] lacuna between physical reality and the interpretive imagination is a very different kind of atlas - You Are Here: NYC, envisioned and edited by Katharine Harmon. This localized follow-up to Harmon's wonderful 2004 atlas of 'personal geographies and other maps of the imagination' presents two hundred wildly diverse maps of the city, alongside original essays exploring the most iconic of them.... What emerges is a layered inquiry into the relationship between self and space, the plurality of perspectives aimed at the same place, and the myriad ways in which we orient ourselves to the landscape against which we live out our lives." - Brain Pickings

"Cognoscenti will enjoy every single page of this book, because each sends interesting messages that will likely bring a smile to the lips and perhaps also a nostalgic sense of place. The book also has much to offer nonspecialists because it serves as a guide to sites that might otherwise be missed..This is a creative and innovative assemblage." - Choice Magazine

"...We can't get enough of maps reinterpreting how we look at the city. [You Are Here: NYC] has assembled an impressive gallery of hundreds of them to give readers a strange and wondrous view of NYC's past, present and imagined future." - Gothamist

"Beautiful, intricate, and informative, these maps are sure to school even lifelong New Yorkers." -Real Simple

"Contrary to the concept that a map's purpose is to find the best route from point A to point B, the images in Harmon's book are an invitation into another kind of cartography--one that includes the mapmakers' relationship to the past, present, and, above all, the imagination." -Afar

"These are SO much better than an MTA subway map. it's seriously awesome: There's everything from a nerd's guide to the city to a breakdown of the totally unrealistic apartments on Friends." - Time Out New York

"You Are Here: NYC is a tribute to the beautiful art maps that have helped city-goers in NYC navigate their city over the years." - Visual News

"In a new book titled You Are Here: NYC, author Katharine Harmon aesthetically and psychologically charts the mapping of New York, from myth to real history, across a beautiful array of maps." - Vice

"New York City is among the most mapped places in the history of the world, 200 of which can be found in this collection. Harmon has compiled maps depicting NYC in stunning real and imagined forms. ...Even the most knowledgeable New Yorker will walk away seeing the city in a whole new light." - Mental Floss

"A wonderful treat for New Yorkers and for lovers of geography--and cartography-inspired looks at life in the past and today. Fans of Harmon's similar but broader previous gems will snap up this new work." - Library Journal

"Consider this a gentle reminder as to why New York is the greatest city in the world. And as Simon de Beauvoir once said, there is something in the New York air that makes sleep useless. Featuring nearly 200 maps, each charting the five boroughs, Harmon's book gives you a glimpse of New York's past and future. Harmon's mapping of New York includes everything, from mythical locations that could have once existed to the real history of NYC. Harmon's collection re-emphasises why New York is a mapmaker's delight."
- Outlook Traveller