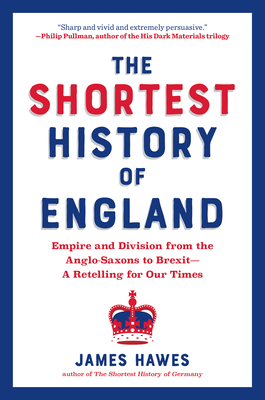 How the most powerful country in the UK was forged by invasion and conquest, and is fractured by its north-south divide. The Shortest History books deliver thousands of years of history in one riveting fast-paced read.

England—begetter of parliaments and globe-spanning empires, star of beloved period dramas, and home of the House of Windsor—is not quite the stalwart island fortress that many of us imagine. Riven by an ancient fault line that predates even the Romans, its fate has ever been bound up with that of its neighbors; and for the past millennia, it has harbored a class system like nowhere else on Earth.

This bracing tour of the most powerful country in the United Kingdom reveals an England repeatedly invaded and constantly reinvented—yet always fractured by its very own Mason-Dixon Line. It carries us swiftly through centuries of conflict between Crown and Parliament (starring the Magna Carta), America’s War of Independence, the rise and fall of empire, two World Wars, and England’s break from the EU. We discover:

The Shortest History of England brings all this and more to prescient life—offering the most direct, compelling route to understanding the country behind today’s headlines.

James Hawes studied German at University of Oxford and University College London, then held lectureships in German at the universities of Maynooth, Sheffield, and Swansea. He has published six novels with Jonathan Cape and is also the author of The Shortest History of Germany and The Shortest History of England. He leads the MA in creative writing at Oxford Brookes University. He is Series Story Consultant, on-screen contributor, and writer of the associated book for the major eight-episode BBC TV history of British creativity, These Brilliant Isles: Art That Made Us, to be screened in spring 2022.

Acclaim from the UK

“James Hawes’s view of English history is sharp and vivid and extremely persuasive.”—Philip Pullman, author of the His Dark Materials trilogy

“No one writes history as well as James Hawes or uses the past to make sense of the present so skillfully. This is an urgent and electrifying work that takes you to the heart of England’s sickness. Do yourself a favor and read it.”—Nick Cohen, journalist for The Observer

“A thorough and absorbing investigation of the English story . . . Perhaps [Hawes’s] greatest skill is in how he brings the story right up to date, able to step back from the current madness with admirable clarity to separate wood and trees in a way most of us would find impossible.”—The New European

“Brilliant insights on every page, and the multiple entry points and clever use of graphics bestows an easy-to-read, magazine-y feel. Favorite thing I learnt: the Anglo-Saxon warrior elite departed en masse about 1076 to fight for the Byzantine Empire, and founded a New England in the Crimea. And yes, I read it in a day.”—Book Brunch


Praise for The Shortest History of Germany

“A fast-moving encapsulation of German history focusing on the thesis that Prussia’s aggression was a short-lived anomaly in the big picture and not reflective of the true German spirit . . . A marvelously concise effort, especially compelling as Angela Merkel is set to step down in 2021, leaving an uncertain vacuum in Europe.”—Kirkus Reviews

“In this ‘shortest history,’ Hawes conquers the dense task of recounting the story of the land and people of what is now Germany over the last two millennia . . . [He] does a good job guiding readers . . . pointing out parallels to today and arguing that Germany’s history, long-ago and recent, makes it a key, if not the key, player in world leadership.”—Booklist

“James Hawes condenses two millennia into a zippy 256 pages. Breezy yet knowledgeable, the book provides a thorough grounding in the major historical events and religious and regional differences that shaped the country at the very heart of Europe.”—Foreword Reviews

“With this pocket-size history, Hawes delivers a wide-ranging yet precise chronicle of political leaders who have served and shaped what is now Germany. . . . This clearly presented history will be of particular interest to readers following the political machinations of the European Union.”—Publishers Weekly