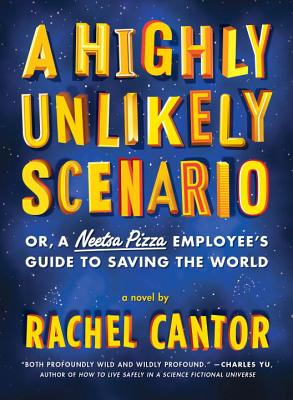 By Rachel Cantor
$16.95
Email orders@greenlightbookstore.com for information about this item.

"Cosmic and comic, full of philosophy, mysticism and celestial whimsy. Both profoundly wild and wildly profound."
—Charles Yu, author of How to Live Safely in a Science Fictional Universe

In the not-too-distant future, competing giant fast food factions rule the world. Leonard works for Neetsa Pizza, the Pythagorean pizza chain, in a lonely but highly surveilled home office, answering calls on his complaints hotline. It’s a boring job, but he likes it—there’s a set answer for every scenario, and he never has to leave the house. Except then he starts getting calls from Marco, who claims to be a thirteenth-century explorer just returned from Cathay. And what do you say to a caller like that? Plus, Neetsa Pizza doesn’t like it when you go off script.

Meanwhile, Leonard’s sister keeps disappearing on secret missions with her “book club,” leaving him to take care of his nephew, which means Leonard has to go outside. And outside is where the trouble starts.

A dazzling debut novel wherein medieval Kabbalists, rare book librarians, and Latter-Day Baconians skirmish for control over secret mystical knowledge, and one Neetsa Pizza employee discovers that you can’t save the world with pizza coupons.

RACHEL CANTOR was born in Hartford, Connecticut, and raised in Rome. She worked for jazz festivals in France and food festivals in Australia before getting degrees in international development and fiction writing. Her short stories have appeared in The Paris Review, One Story, Kenyon Review, Fence, and other publications. She has received fellowships from Yaddo, the MacDowell Colony, the Millay Colony, the Djerassi Resident Artists Program, and elsewhere, and has been a scholar at the Bread Loaf, Sewanee, and Wesleyan Writing Conferences. She lives in Brooklyn.

“A dystopian satire, a story about ­storytelling, believing and listening—A Highly Unlikely Scenario is ultimately a history of our own strange world.”
—New York Times Book Review

“Ultimately, more than incantations and codes, it’s family Cantor cares about. A Highly Unlikely Scenario is about just that: Familial wisdom and love lost and found and shared anew, finally, conquering all.”
—Daily Beast

“[Cantor's] imagination is exhilarating — A Highly Unlikely Scenario will appeal to fans of sci-fi and people who just like to laugh.”
—Cosmopolitan’s 10 Books by Women You Have to Read This Spring

“A treat for those who like zippy sci-fi paced like the stories of Kurt Vonnegut.”
—Time Out New York

“Rachel Cantor joins the ranks of authors who are able to turn philosophical concepts into whiz-bang plots, and make them funny as well. Throw in some family dysfunction, time travel, a librarian ingénue, and the possible destruction of the world, and you’ve got an adventure story replete with nerdy delights.”
—Tor

“The book’s plot, which concerns a future where fast food corporations run the world, is deliciously weird enough to work in its own warped way, walking the line between straight fantasy and fiction.”
—Flavorwire

A Hall of Fame Bestseller in The Millions

One of Liberty Hardy's (RiverRun Bookstore) Must-Read Books from Indie Presses for 2014, on Book Riot

“A heroic tale unlike any other: a novel that is not about a quest but about learning that the world—our world—is full of extraordinary, mysterious wonders."
—Kenyon Review

“In this roller-coaster debut, fast-food corporations rule the world and a peon customer-service worker has to save it... Cantor is in control of her material, and successful dystopian satire makes more sense while you’re lost in it."
—Heeb, Best Books of the Year

“Delightful… The sense of excitement in Cantor’s prose, which propels this familiar story of a few silly, frightened people braving their way through a maddening, baffling world, is what compels us to keep reading.”
—The Rumpus

“Cantor suspends disbelief and creates a loony world entirely of her own, which is terrifically funny and effortlessly enjoyable… Highly entertaining and adventurous.”
—Publishers Weekly

“Cantor’s novel will be a great hit for fans of Douglas Adams’s Hitchhiker’s Guide to the Universe. There’s a lot going on here, and all of it is amusing.”
—Library Journal

“The great pleasure of such novels is the world-building, in which the author invents a new universe while playfully commenting on our own. And what Cantor does of this is great, her impish prose and dry wit perfectly suited to the task.”
—The Telegraph (UK)

“It’s as if Kurt Vonnegut and Italo Calvino collaborated to write a comic book sci-fi adventure and persuaded Chagall to do the drawings. One of the freshest and mostly lively novels I have encountered for quite a while.”
—Jim Crace, author of Harvest and The Pesthouse

“A Highly Unlikely Scenario is a joyful book, full of the energy of undiluted invention and the thoughtful imagination of a writer to watch. It's a wild ride and much more—funny, intelligent and entirely pleasing."
—A.L. Kennedy, author of Day

“Cosmic and comic, full of philosophy, mysticism and celestial whimsy. A story of listening, of souls and bodies, that is at once both profoundly wild and wildly profound."
—Charles Yu, author of How to Live Safely in  a Science Fictional Universe

“Part Italo Calvino, part Ray Bradbury, in this extraordinary novel, Rachel Cantor explores questions of self-knowledge, true love and family, all while saving the world—and winning readers—in the past, present, and future.”
—Hannah Tinti, author of The Good Thief

“I didn't know I needed a mystical Jewish Douglas Adams in my life, but Rachel Cantor is it, and her Guide makes me shep naches every time I turn a page. Buy this book, bubeleh! It will surprise you in ways large and small, and it will fill you with delight."
—Emily Barton, author of Brookland