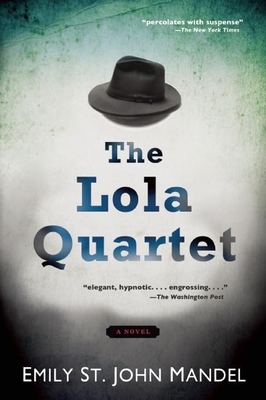 By Emily St John Mandel
Email orders@greenlightbookstore.com for information about this item.
Out of Print / Unavailable

“In her latest, St. John Mandel shows how relationships formed in high school, so often fraught with drama, can ebb and flow and fade and come back to haunt. Among her characters, the perception of what's important and the potential impact of actions varies widely, and something as seemingly insignificant as a photograph can become riddled with layers of meaning, differing for each person who sees it. The writing is taut, the characters well wrought, and St. John Mandel's characteristic infusions of moral ambiguity and complexity remind us, as good novels should, of what it means to be human.”
— Emily Pullen, Skylight Books, Los Angeles, CA

Disgraced and fired from his newspaper job, a young man returns to the Florida town where he grew up and begins to search for a daughter who he has only recently learned may exist and who may be at considerable risk. Gavin Sasaki is a promising young journalist in New York City, until he's fired in disgrace following a series of unforgivable lapses in his work. It's early 2009, and the world has gone dark very quickly; the economic collapse has turned an era that magazine headlines once heralded as the second gilded age into something that more closely resembles the Great Depression. The last thing Gavin wants to do in return to his hometown of Sebastian, Florida, but he's drifting toward bankruptcy and is no position to refuse when he's offered a job by his sister, Eilo, a real estate broker who deals in foreclosed homes. Eilo recently paid a visit to a home that had a ten-year-old child in it, a child who looks very much like Gavin and who has the same last name as Gavin's high school girlfriend Anna, whom Gavin last saw a decade ago. Gavin--a former jazz musician, a reluctant broker of foreclosed properties, obsessed with film noir and private detectives--begins his own private investigation in an effort to track down Anna and their apparent daughter who have been on the run all these years from a drug dealer from whom Anna stole $121,000. In her most ambitious novel yet, Emily Mandel combines her most fully realized characters with perhaps her most fully developed story that examines the difficulty of being the person you'd like to be, loss, the way a small and innocent action (e.g., taking a picture of a girl in a foreclosed house) can have disastrous consequences. The Lola Quartet is a work that pays homage to literary noir, is concerned with jazz, Django Reinhardt, economic collapse, love, Florida's exotic wildlife problem, crushing tropical heat, the leavening of the contemporary world, compulsive gambling, and the unreliability of memory. This is literary fiction with a strong detective story element.

Emily St. John Mandel was born on the west coast of British Columbia, Canada. She studied at The School of Toronto Dance Theatre and lived briefly in Montreal before relocating to New York. She currently lives in Brooklyn. Her first novel, Last Night in Montreal was a June 2009 Indie Next pick and a finalist for Foreword Magazine's 2009 Book of the Year. Her second novel, The Singer's Gun, recently released in paperback, won the Indie Bookseller's Choice Award and was the #1 Indie Next Pick for May 2010. It was also long-listed for The Morning News' 2011 Tournament of Books and the 2011 Spinetingler Awards. She is currently a staff writer for The Millions, and she's had both essays and short fiction recently anthologized.