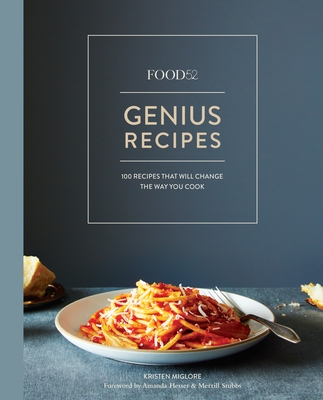 There are good recipes and there are great ones—and then, there are genius recipes.

Genius recipes surprise us and make us rethink the way we cook. They might involve an unexpectedly simple technique, debunk a kitchen myth, or apply a familiar ingredient in a new way. They’re handed down by luminaries of the food world and become their legacies. And, once we’ve folded them into our repertoires, they make us feel pretty genius too. In this collection are 100 of the smartest and most remarkable ones.

There isn’t yet a single cookbook where you can find Marcella Hazan’s Tomato Sauce with Onion and Butter, Jim Lahey’s No-Knead Bread, and Nigella Lawson’s Dense Chocolate Loaf Cake—plus dozens more of the most talked about, just-crazy-enough-to-work recipes of our time. Until now.

These are what Food52 Executive Editor Kristen Miglore calls genius recipes. Passed down from the cookbook authors, chefs, and bloggers who made them legendary, these foolproof recipes rethink cooking tropes, solve problems, get us talking, and make cooking more fun. Every week, Kristen features one such recipe and explains just what’s so brilliant about it in the James Beard Award-nominated Genius Recipes column on Food52. Here, in this book, she compiles 100 of the most essential ones—nearly half of which have never been featured in the column—with tips, riffs, mini-recipes, and stunning photographs from James Ransom, to create a cooking canon that will stand the test of time.

Once you try Michael Ruhlman’s fried chicken or Yotam Ottolenghi and Sami Tamimi’s hummus, you’ll never want to go back to other versions. But there’s also a surprising ginger juice you didn’t realize you were missing and will want to put on everything—and a way to cook white chocolate that (finally) exposes its hidden glory. Some of these recipes you’ll follow to a T, but others will be jumping-off points for you to experiment with and make your own. Either way, with Kristen at the helm, revealing and explaining the genius of each recipe, Genius Recipes is destined to become every home cook’s go-to resource for smart, memorable cooking—because no one cook could have taught us so much.

KRISTEN MIGLORE is the executive editor at Food52.com. She abandoned a career in economics to pursue a master’s degree in Food Studies from New York University and a culinary degree from the Institute of Culinary Education. Her writing has been published in The Wall Street Journal, Saveur, and The Atlantic, and she was nominated for a James Beard Award for the Genius Recipes column in 2014. She lives in New York City.

Founded by Amanda Hesser and Merrill Stubbs in 2009, Food52.com has become the premier online community for cooks at all levels, with more than 30,000 recipes, cooking contests, a hotline, and an integrated kitchen and home shop. It was named Best Food Publication at the 2012 James Beard Awards and Best Culinary Website at the 2013 IACP Awards.

“Culled from chefs, bloggers and food world legends like Julia Child and James Beard, these are dishes that are so smart they'll change the way you approach food, making you a better cook.” – Editors from Tasting Table’s “Kitchen Bookshelf

“Food52 Genius Recipes, is the hands-down winner of the dog-eared page contest — because it instantly dismisses what might be the most important question asked by a cook confronting a new recipe. Namely, will this work? Of course it will. How do we know? Because the dishes in this collection are genius, here defined as legacy recipes ‘handed down by luminaries of the food world.’” – Jenny Rosenstrach, New York Times editor

“None of the recipes are overly “chefy,” which makes this book a great choice for beginner cooks.”  – Joanne Smart, Senior Editor at Fine Cooking

“Guaranteed to excite and enlighten cooks everywhere, Miglore’s collection is a must-have for every kitchen.”
– Publishers Weekly Starred Review

"This is my new favorite cookbook." – Michael Ruhlman