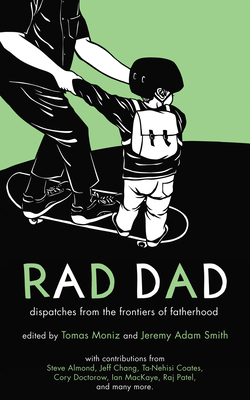 Combining the best of the award-winning magazine Rad Dad and the Daddy Dialectic blog, this compilation features the best essays written for fathers by a multitude of dads from different walks of life. Bestselling authors, writers, musicians, and others collaborate on this collection that focuses on some of the modern complexities of fatherhood. Touching on topics such as the brutalities, beauties, and politics of the birth experience; the challenges of parenting on an equal basis with mothers; the tests faced by transgendered and gay fathers; the emotions of sperm donation; and parental confrontations with war, violence, racism, and incarceration, this anthology leaves no stone unturned in the discussion of being a dad. Contributors include: Steve Almond, Jack Amoureux, Mike Araujo, Mark Andersen, Jeff Chang, Ta-Nehisi Coates, Jeff Conant, Jason Denzin, Cory Doctorow, Craig Elliott, Chip Gagnon, Keith Hennessy, David L. Hoyt, Simon Knapus, Ian MacKaye, Tomas Moniz, Zappa Montag, Raj Patel, Jeremy Adam Smith, Jason Sperber, Burke Stansbury, Shawn Taylor, Tata, Jeff West, and Mark Whiteley.

Tomas Moniz is the founder, the editor, and a writer for the award-winning magazine Rad Dad. He teaches basic skills classes at Berkeley City College and works with the National Writing Project. He lives in Berkeley, California. Jeremy Adam Smith is the founder of the acclaimed blog Daddy Dialectic, the author of The Daddy Shift, the coeditor of Are We Born Racist?, and a 2010–2011 John S. Knight Journalism Fellow at Stanford University. He lives in San Francisco.

“Gives voice to egalitarian parenting and caregiving by men in a truly radical fashion, with its contributors challenging traditional norms of what it means to be a father and subverting paradigms, while making you laugh in the process. With its thoughtful and engaging stories on topics like birth, stepfathering, gender, politics, pop culture, and the challenges of kids growing older, this collection of essays and interviews is a compelling addition to books on fatherhood.”  —Jennifer Silverman, coeditor, My Baby Rides the Short Bus

“With a diverse, smart, and political collection of contributors, Rad Dad will be an instant classic among the new generation of parents whose parenting intersects with their politics. There's no way you can put this book down without feeling both inspired and entertained by the bold honesty and fierce love heard in these voices.”  —Jessica Mills, author, My Mother Wears Combat Boots

"One of the most important voices on the planet—at once parental, political, feminist, humble, and full of heart. In Rad Dad, none of our assumptions about parenting, gender, or the way things ‘have to be’ in the world go unexplored."  —Ariel Gore, author, The Hip Mama Survival Guide

“A book about all the shapes and sizes that dads come in, united by the simple narrative thread of man and his children. Read the book and love your kids. It's that simple.”  —Tom Matlack, cofounder, The Good Men Project

“I say we put the editors of Rad Dad in charge of the patriarchy!”  —Ayun Halliday, author, The Big Rumpus: A Mother's Tale from the Trenches

"The key theme of the book is that we all need a community of support to realize a vision of parenting which actually manifests that other, better world we've all been working toward for so long." —www.LeftTurn.org (November 2011)

"Rad Dad's contributors are a politically engaged, profeminist, anticonsumerist bunch, but the truth is, even if they weren't, this would still be a pretty radical book. Even in 2011, nearly 20 years after the debut of the like-minded Hip Mama zine, for men to talk seriously and introspectively about parenting is a pretty revolutionary act." —Bitch Magazine (December 2011)

"The book is a gem and well-worth picking up. The editors take us on a journey through the various stages of a child's development and the different way radical fathers raise their children." —www.RedDirtReport.com