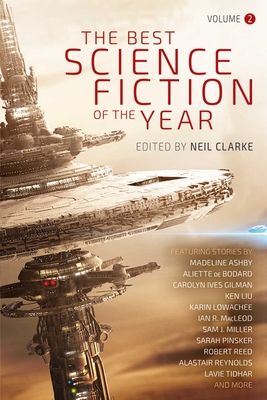 By Neil Clarke (Editor)
$17.99
Email orders@greenlightbookstore.com for information about this item.

First contact with a mysterious race of aliens reveals an unusual request; a family’s pet dog comes to grips with the newly bestowed gift of human-like intelligence; a poet, in danger and alone on a distant world, makes unlikely allies; hundreds of years in the future, a famous hermit lives in the sea above the now-underwater Harvard University; former friends navigate unsteady peace between human refugees and the technologically superior race that saved them; in a future where human life can be infinitely extended through cybertronic rebirth, one woman declines immortality.

For decades, science fiction has compelled us to imagine futures both inspiring and cautionary. Whether it’s a warning message from a survey ship, a harrowing journey to a new world, or the adventures of well-meaning AI, science fiction inspires the imagination and delivers a lens through which we can view ourselves and the world around us. With The Best Science Fiction of the Year: Volume Two, award-winning editor Neil Clarke provides a year-in-review and twenty-seven of the best stories published by both new and established authors in 2016.

Neil Clarke is the award-winning publisher and editor in chief of Clarkesworld magazine, winner of three Hugo Awards for Best Semiprozine, and the editor of the cyborg-themed original anthology Upgraded and The Best Science Fiction of the Year.