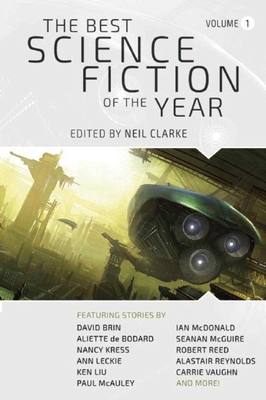 A biological plague begins infecting artificial intelligence; a natural-born Earth woman seeking asylum on another planet finds a human society far different from her own; a food blogger’s posts chronicle a nationwide medical outbreak; trapped in a matchmaking game, a couple tries to escape from the only world they know; a janitor risks everything to rescue a “defective” tank-born baby he can raise as his own.

For decades, science fiction has compelled us to imagine futures both inspiring and cautionary. Whether it’s a warning message from a survey ship, a harrowing journey to a new world, or the adventures of well-meaning AI, science fiction feeds the imagination and delivers a lens through which we can better understand ourselves and the world around us. With The Best Science Fiction of the Year Volume One, award-winning editor Neil Clarke provides a year-in-review and thirty-one of the best stories published by both new and established authors in 2015.

Table of Contents:
“Introduction: A State of the Short SF Field in 2015” by Neil Clarke
“Today I Am Paul” by Martin Shoemaker
“Calved” by Sam J. Miller
“Three Bodies at Mitanni” by Seth Dickinson
“The Smog Society” by Chen Quifan
“In Blue Lily’s Wake” by Aliette de Bodard
“Hello, Hello” by Seanan McGuire
“Folding Beijing” by Hao Jingfiang
“Capitalism in the 22nd Century” by Geoff Ryman
“Hold-Time Violations” by John Chu
“Wild Honey” by Paul McAuley
“So Much Cooking” by Naomi Kritzer
“Bannerless” by Carrie Vaughn
“Another Word for World” by Ann Leckie
“The Cold Inequalities” by Yoon Ha Lee
“Iron Pegasus” by Brenda Cooper
“The Audience” by Sean McMullen
“Empty” by Robert Reed
“Gypsy” by Carter Scholz
“Violation of the TrueNet Security Act” by Taiyo Fujii
“Damage” by David D. Levine
“The Tumbledowns of Cleopatra Abyss” by David Brin
“No Placeholder for You, My Love” by Nick Wolven
“Outsider” by An Owomeyla
“The Gods Have Not Died in Vain” by Ken Liu
“Cocoons” by Nancy Kress
“Seven Wonders of a Once and Future World” by Caroline M. Yoachim
“Two-Year Man” by Kelly Robson
“Cat Pictures Please” by Naomi Kritzer
“Botanica Veneris: Thirteen Papercuts by Ida Countess Rathangan” by Ian McDonald
“Meshed” by Rich Larson
“A Murmuration” by Alastair Reynolds
2015 Recommended Reading List

Neil Clarke is the award-winning publisher and editor in chief of Clarkesworld magazine, winner of three Hugo Awards for Best Semiprozine, and the editor of the 2014 cyborg-themed original anthology Upgraded.