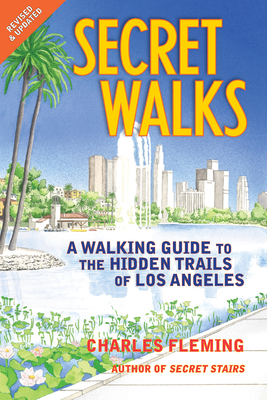 Revised and Updated in September 2020 Secret Walks: A Walking Guide to the Hidden Trails of Los Angeles is a sequel to the popular Secret Stairs: A Walking Guide to the Historic Staircases of Los Angeles, and features another collection of exciting urban walks through parks, canyons, and neighborhoods unknown and unseen by most Angelinos. Each walk is rated for duration, distance, and difficulty, and is accompanied by a map. The walks, like those in Secret Stairs, are filled with fascinating factoids about historical landmarks--the original Bat Cave from Batman, the lake where Opie learned to fish on The Andy Griffith Show, or the storage barn for one of L.A.'s oldest wineries. The book also highlights the people who made the landmarks famous: the infamous water engineer William Mulholland; the convicted murderer and philanthropist Colonel Griffith J. Griffith; Charles Lummis, who walked from Cincinnati to Los Angeles to take a job on the L.A. Times; and tobacco millionaire Abbot Kinney, who dug canals to drain the marshes south of Santa Monica and create his American "Venice." Written in the entertainingly informed style that has made Secret Stairs a Los Angeles Times best-seller, Secret Walks is the perfect book for the walker eager to explore but tired of the crowds at Runyon Canyon or Temescal Park.

Charles Fleming is the author of the Los Angeles Times bestseller Secret Stairs: A Walking Guide to the Historic Staircases of Los Angeles, Secret Stairs East Bay: A Walking Guide to the Historic Staircases of Berkeley and Oakland, the national bestseller High Concept: Don Simpson and the Hollywood Culture of Excess, and co-author of the New York Times bestsellers My Lobotomy, Three Weeks in October: The Manhunt for the Serial Sniper, and A Goomba's Guide to Life. A former staff writer for Newsweek, Variety, and the Los Angeles Herald-Examiner, and a frequent contributor to Vanity Fair, the New York Times, Los Angeles, and LA Weekly, he is currently a staff writer for the Los Angeles Times. Fleming lives in Los Angeles.