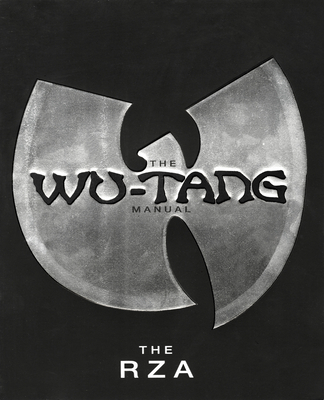 The Wu-Tang Manual is The RZA’s first written introduction to the philosophy and history of Hip-Hop’s original Dynasty, the Wu-Tang Clan.

Written in a style that is at once personal and philosophical, The Wu-Tang Manual unravels the intricate web of personalities (and alter egos), warrior codes, numerological systems, and Eastern spiritual ethics that define the Wu-Tang dynasty. Packed with information that reflects the breadth and depth of the RZA’s — and rest of the Clan’s — intellectual interests and passions, The Wu-Tang Manual is divided into four books of nine chambers each, for a total of 36 chambers. All together, the book provides the breakdown of essential Wu-Tang components, from basic information about each of the nine core members of Wu-Tang Clan to deeper explorations of the key themes of the Wu-Tang universe, a dictionary-like Wu-Slang lexicon, and an entire section of Wu-Tang lyrics with densely annotated explanations of what they mean. For the hardcore Wu-Tang disciple and the recent initiate alike, The Wu-Tang Manual is the definitive guide to the essence of Wu, one of the most innovative hip-hop groups of all time.

The RZA's most recent book, The Tao of Wu, is also available from Riverhead Books.

The RZA is most famous as the founder and leader of the Wu-Tang Clan, the platinum-selling hip-hop group that is widely considered one of the most important of all time. He has continued his music career while successfully branching out into lecturing, television, and film.

“Touching…A glimpse inside the brain of the RZA, the producer/spiritual leader of Staten Island’s revolutionary hip-hop collective, the Wu-Tang Clan….Inspirational.” –The New York Times Book Review

“Is there a Pulitzer Prize in the Wu’s future?” –XXL Magazine

“At once edifying and wildly entertaining, [The Wu-Tang Manual] occupies a fertile emotional crossroads of nostalgia, juvenile wish-fulfillment, and adult appreciation…it could augur a rebirth for one of the most influential rap groups of the 1990s.” –Pitchfork

“A rabbit hole into the Clan’s history and obsessions with kung-fu films, numerology, chess, and Eastern spirituality.” –Entertainment Weekly

“Equal parts travelogue, manifesto, dictionary and cultural decoder ring for one of hip-hop’s most influential and unorthodox rap groups…It’s quite obvious that the nine-member crew is as adept in analyzing Eastern philosophies, chess strategies and numerological systems as they are in smoking ells and dodging bullets.”
--Columbus Alive (alternative weekly)