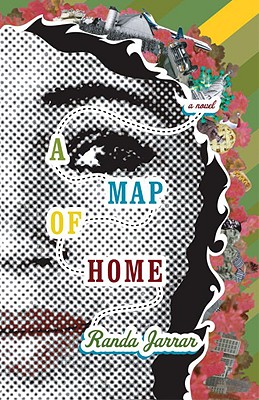 Nidali, the rebellious daughter of an Egyptian-Greek mother and a Palestinian father, narrates the story of her childhood in Kuwait, her teenage years in Egypt (to where she and her family fled the 1990 Iraqi invasion), and her family's last flight to Texas. Nidali mixes humor with a sharp, loving portrait of an eccentric middle-class family, and this perspective keeps her buoyant through the hardships she encounters: the humiliation of going through a checkpoint on a visit to her father's home in the West Bank; the fights with her father, who wants her to become a famous professor and stay away from boys; the end of her childhood as Iraq invades Kuwait on her thirteenth birthday; and the scare she gives her family when she runs away from home.

Funny, charming, and heartbreaking, A Map of Home is the kind of book Tristram Shandy or Huck Finn would have narrated had they been born Egyptian-Palestinian and female in the 1970s.

Randa Jarrar was born in Chicago in 1978. She grew up in Kuwait and Egypt, and moved back to the U.S. at thirteen. She is a writer and translator whose honors include the Million Writers Award, the Avery Hopwood and Jule Hopwood Award and the Geoffrey James Gosling Prize. Her fiction has appeared in Ploughshares as well as in numerous journals and anthologies. Her translations from the Arabic have appeared in Words Without Borders: The World Through the Eyes of Writers; recently, she translated Hassan Daoud's novel, The Year of the Revolutionary New Bread-Making Machine. She currently lives in Ann Arbor, Michigan. A Map of Home is her first novel. Visit Randa online at rockslinga.blogspot.com.

“…a winning combination … [A Map of Home is a] spectacular fresh and funny debut novel.”

Jarrar's sparkling debut about an audacious Muslim girl growing up in Kuwait, Egypt and Texas is intimate, perceptive and very, very funny. Nidali Ammar is born in Boston to a Greek-Egyptian mother and a Palestinian father, and moves to Kuwait at a very young age, staying there until she's 13, when Iraq invades. A younger brother is born in Kuwait, rounding out a family of complex citizenships. During the occupation, the family flees to Alexandria in a wacky caravan, bribing soldiers along the way with whiskey and silk ties. But they don't stay long in Egypt, and after the war, Nidali's father finds work in Texas. At first, Nidali is disappointed to learn that feeling rootless doesn't make her an outsider in the States, and soon it turns out the precocious and endearing Arab chick isn't very different from other American girls, a reality that only her father may find difficult to accept. Jarrar explores familiar adolescent ground—stifling parental expectations, precarious friendships, sensuality and first love—but her exhilarating voice and flawless timing make this a standout. (Sept.)

A first-time novelist offers a fictional take on her own complex heritage.
Nidali’s Baba is Palestinian. Her Mama is half-Greek and half-Egyptian. In addition to this mixed-up background, Nidali has an American passport and a precociously peripatetic personal history. Born in Boston, Nidali grows up in Kuwait, but her family flees to Egypt during the 1990 Iraqi invasion. By the time she lands in Texas, Nidali has become a seasoned traveler, and, wherever she goes, she carries with her a keen awareness of her inescapable difference. Nidali’s story is shaped by the harsh realities of ethnic division, political uncertainty and war, but it is also, essentially, a typical coming-of-age story. Jarrar is a funny, incisive writer, and she’s positively heroic in her refusal to employ easy sentimentality or cheap pathos. Nidali is a misfit living through calamitous times, but Jarrar understands that all adolescents feel like misfits living through calamitous times. The political is always personal for Nidali. For her, bombs dropping on Kuwait mean that nobody remembers her 13th birthday. As her family drives across Iraq on their way to Egypt, she writes a letter to Saddam Hussein complaining that his invasion has separated her from her boyfriend. And, ultimately, international crises have less impact on Nidali’s life than ongoing battles between her and her Baba on subjects like curfew and college.
A coming-of-age story that’s both singular and universal—an outstanding debut. (Agent: Jin Auh/The Wylie Agency)

Randa Jarrar, like her main character Nidali, is of Arab and Greek heritage and grew up in Kuwait, Egypt and the US. Her partly autobiographical novel sparkles with humour and intelligence.

Nidali tenderly describes her rollicking family life, recounted with both a wicked sense of humour and seriousness. Nidali’s parents are larger-than-life characters. (‘My parents are more of a trip than the fictional ones,’ Jarrar confided recently.) The novel opens with them arguing about Nidali’s name when she is born. ‘Baba was amusing himself while angering Mama to extremes, a skill he was beginning to master.’ Conflict, competition and wit become the underlying sentiments of the household – it’s an Arab version of Who’s Afraid of Virginia Woolf?, albeit a kinder one.

The family moves to Kuwait, where Nidali attends an English school, dodges her parents’ fights and invents zaatar burgers.

When Iraq invades, the family leaves for Egypt – a decision made when Nidali’s father discovers they have run out of zaatar. From Egypt they move to Texas, where Nidali comes of age, begins to see herself outside her parents’ all-encompassing scope and, in a final twist, finds herself come full circle. This brilliant book is not one to overlook.

Keep your eyes peeled for these new fall books:

A Map of Home:
Moving -- and often quite funny -- debut about a Muslim girl who is forced to flee Kuwait to Egypt, then on to Texas, where she must really come of age.