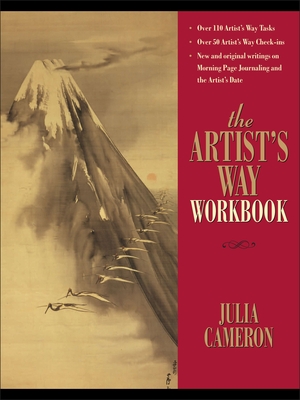 For the millions of people who have uncovered their creative selves through the Artist's Way program: a workbook and companion to the international bestseller.

A life-changing twelve-week program, The Artist's Way has touched the lives of millions of people around the world. Now, for the first time, fans will have this elegantly designed and user-friendly volume for use in tandem with the book. The Artist's Way Workbook includes:

- more than 110 Artist's Way tasks;
- more than 50 Artist's Way check-ins;
- a fascinating introduction to the workbook in which Cameron shares new insights into the creative process that she has culled in the decade since The Artist's Way was originally published;
- new and original writings on Morning Page Journaling and the Artist's Date-two of the most vital tools set forth by Cameron in The Artist's Way.

Julia Cameron has been an active artist for more than three decades. She is the author of more than thirty books, including such bestselling works on the creative process as The Artist’s Way, Walking in This World, and Finding Water. Also a novelist, playwright, songwriter, and poet, she has multiple credits in theater, film, and television, including an episode of Miami Vice, which featured Miles Davis, and Elvis and the Beauty Queen, which starred Don Johnson. She was a writer on such movies as Taxi Driver, New York, New York, and The Last Waltz. She wrote, produced, and directed the award-winning independent feature film God's Will, which premiered at the Chicago International Film Festival, and was selected by the London Film Festival, the Munich International Film Festival, and the Women in Film Festival, among others. In addition to making films, Cameron has taught film at such diverse places as Chicago Filmmakers, Northwestern University, and Columbia College. She is also an award-winning playwright, whose work has appeared on such well-known stages as the McCarter Theater at Princeton University and the Denver Center for the Performing Arts.

THE ARTISTS WAY by Julia Cameron is not exclusively about writingit is about discovering and developing the artist within whether a painter, poet, screenwriter or musicianbut it is a lot about writing. If you have always wanted to pursue a creative dream, have always wanted to play and create with words or paints, this book will gently get you started and help you learn all kinds of paying-attention techniques; and that, after all, is what being an artist is all about. Its about learning to pay attention.
--Anne Lamott, Mademoiselle

The premise of the book is that creativity and spirituality are the same thing, they come from the same place. And we were created to use this life to express our individuality, and that over the course of a lifetime that gets beaten out of us. [THE ARTISTS WAY] helped me put aside my fear and not worry about whether the record would be commercial.
--Grammy award-winning singer Kathy Mattea

Julia Cameron brings creativity and spirituality together with the same kind of step-by-step wisdom that Edgar Cayce encouraged. The result is spiritual creativity as a consistent and nourishing part of daily life.
--Venture Inward

I never knew I was a visual artist until I read Julia Camerons THE ARTISTS WAY.
--Jannene Behl in Artists Magazine

Julia Camerons landmark book THE ARTISTS WAY helped me figure out who I really was as an adult, not so much as an artist but as a person. And award-winning journalist and poet, Camerons genius is that she doesnt tell readers what they should do to achieve or who they should beinstead she creates a map for readers to start exploring these questions themselves.
--Michael F. Melcher, Law Practice magazine

This is not a self-help book in the normative sense. It is simply a powerful book that can challenge one to move into an entirely different state of personal expression and growth.
--Nick Maddox, Deland Beacon

THE ARTISTS WAY (with its companion volume THE ARTISTS WAY MORNING PAGES JOURNAL) becomes a friend over time, not just a journal. Like a journal, it provokes spontaneous insights and solutions; beyond journaling, it establishes a process that is interactive and dynamic.
--Theresa L. Crenshaw, M.D., San Diego Union-Tribune

If you really want to supercharge your writing, I recommend that you get a copy of Julia Camerons book THE ARTISTS WAY. Im not a big fan of self-help books, but this book has changed my life for the better and restored my previously lagging creativity.
--Jeffrey Bairstow, Laser Focus World

Working with the principle that creative expression is the natural direction of life, Cameron developed a three month program to recover creativity. THE ARTISTS WAY shows how to tap into the higher power that connects human creativity and the creative energies of the universe.
--Mike Gossie, Scottsdale Tribune

THE ARTISTS WAY is the seminal book on the subject of creativity and an invaluable guide to living the artistic life. Still as vital todayor perhaps even more sothan it was when it was first published in 1992, it is a provocative and inspiring work. Updated and expanded, it reframes THE ARTISTS WAY for a new century.
--Branches of Light

THE ARTISTS WAY has sold over 3 million copies since its publication in 1992. Cameron still teaches it because there is sustained demand for its thoughtful, spiritual approach to unblocking and nurturing creativity. It is, dare we say, timeless.
--Nancy Colasurdo, FOXBusiness

Praise for VEIN OF GOLD, the second volume in the ARTISTS WAY trilogy

For those seeking the wellspring of creativity, this book, like its predecessor, is a solid gold diving rod.
--PUBLISHERS WEEKLY