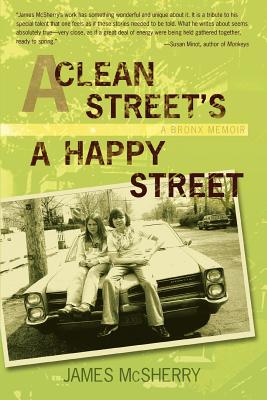 "To say McSherry has lived a 'hard knock' life is an understatement, but the Lehman High School teacher and Brio Award winner has crafted a Bronx version of Angela's Ashes that resonates with hope, wit, and perseverance." -Derek Woods, host of the television program, Bronx Magazine Told through a series of striking vignettes, A Clean Street's A Happy Street: A Bronx Memoir is a masterful coming-of-age tale brimming with heartache, forgiveness, and redemption. Growing up in a tough Bronx neighborhood during the 1960s and 1970s, James McSherry dreams of becoming a writer. Faced with his mother's mental illness, his father's brutal murder, and poverty's chokehold, McSherry refuses to lose sight of his future. He struggles to survive in a fragmented world, clinging to his education and his poetry when his mother's fragile grip on reality shatters. The harsh consequences of his mother's debilitating mental health binds McSherry and his four siblings in a painful knot, but the love and commitment they have for each other sustains them through a turbulent adolescence. Powerful and moving, A Clean Street's A Happy Street intimately reveals one man's determination to break free from a troubling childhood and boldly create a luminous new future.