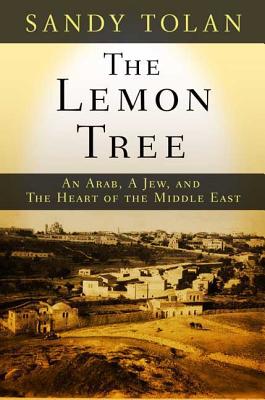 By Sandy Tolan
Email orders@greenlightbookstore.com for information about this item.
Out of Print / Unavailable

The tale of a simple act of faith between two young people - one Israeli, one Palestinian - that symbolizes the hope for peace in the Middle East.

In 1967, not long after the Six-Day War, three young Arab men ventured into the town of Ramle, in what is now Jewish Israel. They were cousins, on a pilgrimage to see their childhood homes; their families had been driven out of Palestine nearly twenty years earlier. One cousin had a door slammed in his face, and another found his old house had been converted into a school. But the third, Bashir Al-Khairi, was met at the door by a young woman called Dalia, who invited them in.

This act of faith in the face of many years of animosity is the starting point for a true story of a remarkable relationship between two families, one Arab, one Jewish, amid the fraught modern history of the regio. In his childhood home, in the lemon tree his father planted in the backyard, Bashir sees dispossession and occupation; Dalia, who arrived as an infant in 1948 with her family from Bulgaria, sees hope for a people devastated by the Holocaust. As both are swept up in the fates of their people, and Bashir is jailed for his alleged part in a supermarket bombing, the friends do not speak for years. They finally reconcile and convert the house in Ramle into a day-care centre for Arab children of Israel, and a center for dialogue between Arabs and Jews. Now the dialogue they started seems more threatened than ever; the lemon tree died in 1998, and Bashir was jailed again, without charge.

The Lemon Tree grew out of a forty-three minute radio documentary that Sandy Tolan produced for Fresh Air. With this book, he pursues the story into the homes and histories of the two families at its center, and up to the present day. Their stories form a personal microcosm of the last seventy years of Israeli-Palestinian history. In a region that seems ever more divided, The Lemon Tree is a reminder of all that is at stake, and of all that is still possible.

Sandy Tolan is the author of Me & Hank: A Boy and His Hero, Twenty-five Years Later. He has written for the New York Times Magazine and for more than 40 other magazines and newspapers. As cofounder of Homelands Productions, Tolan has produced dozens of radio documentaries for NPR and PRI. His work has won numerous awards, and he was a 1993 Nieman Fellow at Harvard University and an I. F. Stone Fellow at the UC-Berkeley Graduate School of Journalism, where he directs the school's Project on International Reporting.

“Rarely...have the competing narratives of individual experience been set forth so poignantly as in Sandy Tolan's The Lemon Tree...Tolan is a magnificent storyteller. The Lemon Tree reads like a novel.” —Roane Carey, The Nation

“A wonderful book. I learned so much about the Middle East conflict--from a historical and human perspective. The author took great care with his research. I walked away with a better understanding of the Jewish and Palestinian points of view.” —Kathy Litts, Oregon Book Company, Orgeon City, OR

“This truly remarkable book presents a powerful account of Palestinians and Israelis who try to break the seemingly endless chain of hatred and violence. Capturing the human dimension of the conflict so vividly and admirably, Sandy Tolan offers something both Israelis and Palestinians al too often tend to ignore: a ray of hope.” —Tom Segev, author of One Palestine, Complete and 1949: The First Israelis

“This is a hard book to read with dry eyes and without a lump in one's throat. And it is hard to read, also, without feeling--dare one even say the word in speaking about the Middle East?--something approaching hope. Sandy Tolan has found a remarkable story, and has told it in all its beauty and sadness.” —Adam Hochschild, author of Bury the Chains and King Leopold's Gold

“This is a passionate and astonishing story through which some of the most extraordinary events of the twentieth century unfold. The inspiring lives of two unique people, and Tolan's compassion and cleverness in narrating them, illuminate the tragedy of Palestine in the most moving and revealing way. Readers will acquire a huge amount of knowledge while being carried along effortlessly through the epic events of war and peace in the Middle East.” —Karma Nabulsi, Prize Research Fellow, Oxford University, and author of Traditions of War

“This fascinating book is a tapestry of compassion, grief, and hope about a land that has not been running short of any. The Israeli-Palestinian conflict has long been one of the most bitterly disputed and extensively analyzed in the world, and yet only a few books can claim to grasp the human dimension of the conflict as honestly and thoroughly as this one. This painfully beautiful narrative lingers in the mind long after the book is over.” —Elif Shafak, professor of Near Eastern Studies, University of Arizona, and author of The Flea Palace and The Saint of Incipient Insanities