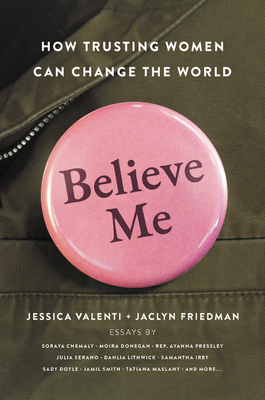 Jessica Valenti is the author of multiple books on feminism, politics and culture. Jessica is also the founder of Feministing.com. Her writing has appeared in publications like the New York Times, the Washington Post, Nation, and Ms. magazine. She is currently a columnist at the Guardian US. Jessica lives in Brooklyn with her husband and daughter.
Jaclyn Friedman's work has redefined the concept of "healthy sexuality" and popularized the "yes means yes" standard of sexual consent that is quickly becoming law on many U.S. campuses. She is a popular speaker and opinion writer and the author of three books. Friedman hosts Unscrewed, a podcast exploring paths to sexual liberation, named a Best Sex Podcast by both Marie Claire and Esquire.

"Feminist champions Jessica Valenti and Jaclyn Friedman are back with their second anthology, rallying a handful of contributors like Samantha Irby, Dahlia Lithwick, Ayanna Pressley, Moira Donegan, and Julia Serano to share their personal stories on sexual assault, consent, gender norms, and overall life after the #MeToo movement."—Marie Claire, Best Books of Winter

"This urgent volume shines a light on the moral imperative to trust and believe women in order to save lives."—Ms.

"In this urgent essay collection, feminist activists Valenti and Friedman bring together a diverse range of contributors to make the case for 'a simple but radical trust in women' ... Consistently well-written and soundly reasoned, these essays persuasively cast the tendency to doubt women as one of America's greatest social ills ... an illuminating call to action."—Publishers Weekly

"Inclusive and essential... a must-have for the modern reader."—Library Journal, starred review

"Believe Me is a book that lives up to its title. Jessica Valenti and Jaclyn Friedman have brought together writers, legal experts, actors, advocates, and more, creating both a call to action and a roadmap for a better future -- the future women deserve. It's hard to imagine a more powerful and timely portrait of the moment we're in, and where I hope we're headed."—Cecile Richards, co-founder of Supermajority and former president of Planned Parenthood

"A fierce, necessary volume of truth, accountability, and prognostication from a roster of the most fearless and perceptive writers working today. Believe Me feels like therapy to anyone who has been paying attention."—Lindy West