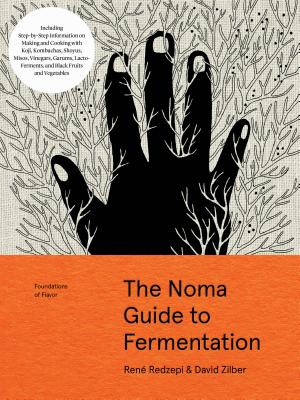 “An indispensable manual for home cooks and pro chefs.” —Wired

At Noma—four times named the world’s best restaurant—every dish includes some form of fermentation, whether it’s a bright hit of vinegar, a deeply savory miso, an electrifying drop of garum, or the sweet intensity of black garlic. Fermentation is one of the foundations behind Noma’s extraordinary flavor profiles.

Now René Redzepi, chef and co-owner of Noma, and David Zilber, the chef who runs the restaurant’s acclaimed fermentation lab, share never-before-revealed techniques to creating Noma’s extensive pantry of ferments. And they do so with a book conceived specifically to share their knowledge and techniques with home cooks. With more than 500 step-by-step photographs and illustrations, and with every recipe approachably written and meticulously tested, The Noma Guide to Fermentation takes readers far beyond the typical kimchi and sauerkraut to include koji, kombuchas, shoyus, misos, lacto-ferments, vinegars, garums, and black fruits and vegetables. And—perhaps even more important—it shows how to use these game-changing pantry ingredients in more than 100 original recipes.

Fermentation is already building as the most significant new direction in food (and health). With The Noma Guide to Fermentation, it’s about to be taken to a whole new level.

René Redzepi is the chef and co-owner of Noma in Copenhagen, four times recognized as the world’s best by the World’s 50 Best Restaurants. Redzepi has twice appeared on the cover of Time magazine (and been named one of Time’s 100 Most Influential People in the World); been featured in publications from the New York Times to Wired; and been profiled in two feature-length documentaries and countless national and international media outlets. His first book, Noma: Time and Place in Nordic Cuisine, was an IACP and James Beard Award winner. He is also the author of A Work in Progress. He lives with his wife, Nadine Levy Redzepi, and their three children. Find him on Instagram @reneredzepinoma and @nomacph.

David Zilber is a chef and photographer who hails from Toronto, Canada. He has cooked from coast to coast across North America, most notably as a sous-chef at Hawksworth Restaurant in Vancouver. He has worked at Noma since 2014 and has served as director of its fermentation lab since 2016. He enjoys Jamaican patties and quantum physics. Find him on Instagram @david_zilber.

“A significant [marker of] culinary culture. . . . A fresh set of transformative cooking fundamentals . . . [that] make ferments something cooks reach for as readily as salt.”
—The New York Times

“An indispensable manual for home cooks and pro chefs.”
—Wired

“[A] window into the magic . . . of what is arguably the most famous restaurant in the world.”
—Food Wine

“The Noma Guide to Fermentation is the scientifically geekiest, the most modern and the most radical [of fermentation guides]. It’s also one of the most illuminating. I’m someone who has all manner of Ball jars and mothers bubbling under her kitchen sink, but this book helped me to finally understand the processes involved. . . . Each recipe is accompanied by ideas for what to actually do with the stuff, bending the mind further to open new food pathways.”
—The New York Times Book Review

“This book on fermentation is the master class.”
—Eater, The Best Cookbooks of Fall 2018

“The Noma Guide to Fermentation is really something special. . . . It’s a great beginner’s overview and it’s also creative and artistic, and I really recommend checking it out.”
—The Splendid Table

“A stunningly detailed guide to fermentation, offering home cooks and curious eaters an unprecedented glimpse into the fascinating mechanics of the centuries-old technique, with recipes. The Noma Guide to Fermentation is a landmark work that makes the biochemical process newly accessible, and, dare we say it, fun.”
—FoodandWine.com

“What the book makes clear is that [Redzepi’s] secret isn’t fermentation, it is the ways in which he’s elevated it to a fine art. . . . Penned with the lightness, humor and journalistic acumen of a Michael Pollan tome.”
—Modern Farmer

“Approachable recipes that home cooks can use to add nuance to their cooking.”
—Fine Cooking

“A wildly practical and fascinating examination of one of the world’s oldest methods of food preservation.”
—Publishers Weekly, starred review

“Something for the true food nerd (and I mean that in the most complimentary way). . . . The recipes are fascinatingly inventive, and the processes behind those recipes are written in a style that makes a novice like me feel like he could give it a go.”
—FieldandStream.com

“Without question, you need this book. Even if you already have a basic understanding about lacto-fermenting; fermenting kombucha, vinegar, and working with koji; and making your own vinegars, this volume is a treasure trove of inspiration. . . . Beyond the fermentations themselves, Redzepi and Zilber share clever ideas for using each ingredient, such as a blended fermented blueberry paste to smear on fresh corn [and] a coffee kombucha soaked into ladyfingers for tiramisu. . . . Indispensable.”
—Plate, The Best Fall 2018 Cookbooks

“A new way to create the building blocks of great dishes that will really set your cooking apart.”
—Robb Report, The 6 Cookbooks You’ll Want to Add to Your Shelf This Fall

“[Redzepi’s] influence on the food world is unparalleled. . . . Once dubbed the ‘Locavore Hero’ for popularizing the local food movement and foraged foods, Redzepi now believes that the future of Noma as well as the food industry is clearly fermented. . . .The Noma Guide to Fermentation aims to promote the creative new flavor profiles yielded by fermentation as well as propel the idea that fermentation can actually make cooking easier. . . . [It’s] the home cook’s new favorite food hack.”
—Forbes.com

“Perfect for every experience level of readers interested in fermentation.”
—Mother Earth News

“In the detailed, intelligent Noma Guide to Fermentation . . . accessibility is the goal. . . . What’s astounding about this book, coming from Noma, is that the recipe for lacto fermented blueberries is simple, easy, well laid out, presented with options (like many of the recipes here) based on your preferences or available equipment. Most recipes are followed by suggestions that seem delicious, and again, astoundingly sane.”
—The Daily Beast

“If you’re eager to dive into the wonderful, funky world of fermented food (and you should be, as the effects on your health and taste buds will be nothing short of extraordinary), this book will be your new go-to guide.”
—Mind Body Green, The 10 Best Healthy Cookbooks for Fall

“Can be achieved at home. Honest. . . . A massive amount of thought has been put into the writing and the layout of this book and it is clear that a lot of heart has gone into it, too. To be privy to such an extensive and in-depth knowledge of fermentation from these two is an incredible benefit.”
—New York Journal of Books

“Techniques for achieving the tangy, deeply savory, overall extraordinary flavor that fermentation can bring to a dish.”
—Epicurious

“Highly original. . . . Throw yourself into it and the rewards are many. The book comes alive when it lists ways to serve and share the end results—black garlic, for instance, can be slathered on crusty grilled sourdough bread, tossed with pastas and pesto, or turned into a black onion soup. . . . All-embracing, nerdy, driven, cultish and compelling.”
—Australian Financial Review

“[Reveals] the foodie secret of the world’s top chef. . . . Promises to be the canonical western work on microbial terroir.”
—The Times (London)

“An indispensable glimpse into how the four-time world’s best restaurant approaches fermented foods, all adapted for the home kitchen. . . . Once you’ve made your first ferment, you’ll understand first-hand how intuitive the methods are and how applicable they are to limitless raw ingredients.”
—National Post (Canada)

“With The Noma Guide to Fermentation, René and his team have written the definitive guide to creating fermented foods. We’re all smarter for the years of research that went into this book, and I’m thrilled that home cooks and professionals alike have access to this information.”
—David Chang, chef/founder of Momofuku

“René Redzepi and the Noma team bring extraordinary creativity to the ancient and universal practice of fermentation. Accessible enough for novices, The Noma Guide to Fermentation is sure to elevate the practices of those of us already enchanted with the vast realm of fermentation.”
—Sandor Katz, award-winning author of The Art of Fermentation

“After reading The Noma Guide to Fermentation, I want to lacto-ferment every single thing in sight! A whole new world of ideas has been opened. As ever, René and his Noma team generously share their knowledge of their initial fermentation ‘accidents’ and how the alchemy of mold, yeast, and bacteria can completely transform one’s cooking.”
—Kylie Kwong, chef and co-owner of Billy Kwong

“The Noma Guide to Fermentation gathers detailed recipes for the restaurant’s most successful discoveries, documents the current state of the craft they’ve helped advance, and offers a superb introduction for chefs and home cooks alike to the practicalities and pleasures of cooking with microbes.”
—Harold McGee, award-winning author of On Food and Cooking

“The science lab at Noma is the perfect culinary incubator to take on an in-depth study of fermentation. I am thrilled that Redzepi and Zilber have given us access to their diligent research as they offer us the recipes for their most successful, and delicious, results!”
—Alice Waters, author of The Art of Simple Food