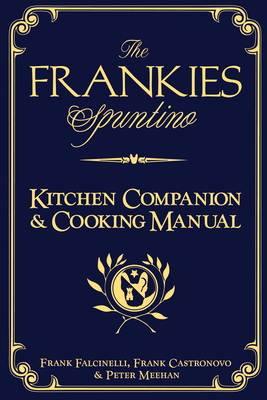 “Everything I made from the book . . . was surprisingly easy and just as delicious as what I’ve eaten at the restaurants.” —New York Times Book Review

From Brooklyn's sizzling restaurant scene, the hottest cookbook of the season...

From urban singles to families with kids, local residents to the Hollywood set, everyone flocks to Frankies Spuntino—a tin-ceilinged, brick-walled restaurant in Brooklyn's Carroll Gardens—for food that is "completely satisfying" (wrote Frank Bruni in The New York Times). The two Franks, both veterans of gourmet kitchens, created a menu filled with new classics: Italian American comfort food re-imagined with great ingredients and greenmarket sides. This witty cookbook, with its gilded edges and embossed cover, may look old-fashioned, but the recipes are just we want to eat now. The entire Frankies menu is adapted here for the home cook—from small bites including Cremini Mushroom and Truffle Oil Crostini, to such salads as Escarole with Sliced Onion & Walnuts, to hearty main dishes including homemade Cavatelli with Hot Sausage & Browned Butter. With shortcuts and insider tricks gleaned from years in gourmet kitchens, easy tutorials on making fresh pasta or tying braciola, and an amusing discourse on Brooklyn-style Sunday "sauce" (ragu), The Frankies Spuntino Kitchen Companion & Kitchen Manual will seduce both experienced home cooks and a younger audience that is newer to the kitchen.

Frank Castronovo trained with such culinary superstars as Jacques Pépin and France's Paul Bocuse. In 2003, he opened Frankies 457 Spuntino with childhood friend Frank Falcinelli. He lives with his wife and two daughters in Carroll Gardens, Brooklyn.

Frank Falcinelli has worked in Michelin two-star restaurants in France, with chefs Charlie Palmer and David Burke in New York, and was a partner and chef in the New York hot spot Moomba. He lives in Brooklyn with his French bulldog, Frankies mascot Merlin.

Peter Meehan is a food writer and former New York Times restaurant columnist. His most recent book is Momofuku, co-authored with the chef David Chang.

“The ingredient lists are short, the recipes are simple, flavorful, and easy to follow.”
—New York Times

“Everything I made from the book . . . was surprisingly easy and just as delicious as what I’ve eaten at the restaurants.”
–New York Times Book Review

“A cookbook that's as useful as it is artfully conceived.”
–GQ

“The team behind the popular Brooklyn eatery divulges light Italian secrets in this beautiful tome worthy of any bookshelf.”
–Entertainment Weekly

"When we’re craving the comforts of red sauce classics, the Frankie’s cookbook is full of reliable recipes guaranteed to keep us satiated."
—Time Out New York

“The book is a perfect reflection of the Franks’ philosophy of making the past the hippest part of the present.”
–Food Wine

“This quirky, lovely, intelligent cookbook is worth reading from cover to cover than starting over again.”
–Pittsburgh Post-Gazette