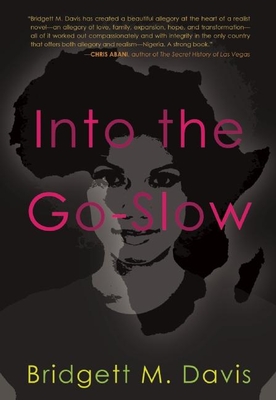 A young black woman visits Africa on a quest for peace, meaning, and love in "a beautiful allegory at the heart of a realist novel" (Chris Abani, author of The Secret History of Las Vegas).

In 1986 Detroit, twenty-one-year-old Angie is still mourning the death of her brilliant, radical sister, Ella, when she impulsively decides to pack up and go to the place where Ella tragically died four years before: Nigeria. There, Angie retraces her sister's steps, all the while navigating the chaotic landscape of a major African country on the brink of democracy and careening toward a coup d' tat.

At the center of her quest is a love affair that upends everything Angie thought she knew about herself. Against a backdrop of Nigeria's infamous "go-slow"--traffic as wild and unpredictable as the country itself--Angie begins to unravel the mysteries of the past, and opens herself up to love and life after Ella.

Bridgett M. Davis is the author of the memoir The World According To Fannie Davis: My Mother's Life In The Detroit Numbers, as well as the two novels Into the Go-Slow and Shifting Through Neutral, which was shortlisted for the Hurston/Wright Award. She is writer/director of the award-winning feature film Naked Acts, and a creative writing and journalism professor at Baruch College - City University of New York, where she is director of the Sidney Harman Writer-in-Residence Program. Her essays have appeared in The Washington Post, The Millions, Salon, LitHub, Real Simple, and O, The Oprah Magazine. A graduate of Spelman College and Columbia University's Graduate School of Journalism, she lives in Brooklyn with her family.