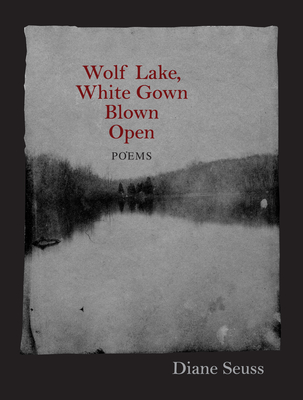 Diane Seuss's poems grow out of the fertile soil of southwest Michigan, bursting any and all stereotypes of the Midwest and turning loose characters worthy of Faulkner in their obsession, their suffering, their dramas of love and sex and death. The first section of this collection pays homage to the poet's roots in a place where the world hands you nothing and promises less, so you are left to invent yourself or disappear. From there these poems both recount and embody repeated acts of defiant self-creation in the face of despair, loss, and shame, and always in the shadow of annihilation.

With darkly raucous humor and wrenching pathos, Seuss burrows furiously into liminal places of no dimension— state lines, lakes' edges, the space "between the m and the e in the word amen." From what she calls "this place inbetween" come profane prayers in which "the sound of hope and the sound of suffering" are revealed to be "the same music played on the same instrument."

Midway through this book, a man tells the speaker that beauty is that which has not been touched. This collection is a righteous and fierce counterargument: in the world of this imagination, beauty spills from that which has been crushed, torn, and harrowed. "We receive beauty," Seuss writes, "as a nail receives / the hammer blow." This is the poetry that comes only after the white dress has been blown open—the poetry of necessity, where a wild imagination is the only hope.

Diane Seuss is writer-in-residence at Kalamazoo College. Her first poetry collection, It Blows You Hollow, was published in 1998 by New Issues Press. Her poems have been published in several anthologies and in many literary magazines, including Poetry, New Orleans Review, North American Review, and The Georgia Review.

"In Wolf Lake, White Gown Blown Open we are introduced to a poetry both gentle and heart-breaking—and ferocious. In these fractured, yet lyrical, narratives and voices, there is a remarkable new way of approaching the terrible clarity of beauty and horror in this world. Diane Seuss writes with the intensity of a soothsayer. These poems spring from the depths of a hypnotic sensibility. They exist in the best of the literary and oral traditions—a love of language revealed in the use of all of its tools. Here is a poet vocalizing so much of what it means to be alive that I felt afraid at times to put the book down or to blink."—Laura Kasischke, author of In a Perfect World and Feathered

"For all its considerable invention, wit, tonal complexity, and vivid imagery—not to mention its economy and concentration—Diane Seuss's work is never content to settle for craft. There is an insistently human connection to experience in each of her poems."—Stuart Dybek, author of Streets in Their Own Ink

"Diane Seuss's poems take us to a place 'beyond the jurisdiction / of the sentence: (to) a secret place, bordered by lilacs.' I could say they were 'compelling' (they are astonishingly so). I could say this poet was 'the best poet of her generation' (she just might be). What I want to say is that sometimes the pure products of America go crazy in a way that changes everything. When was the last time you picked up a book of poems and couldn't for the life of you put it down?"—Gail Wronsky, author of Blue Shadowbehind Everything Dazzling and Poems for Infidels