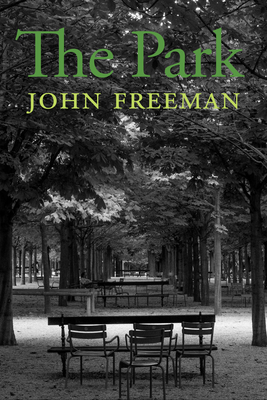 By John Freeman
$17.00
Not In Store / Available To Order (allow for shipping time to bookstore or direct-to-home)

In The Park, his second book of poetry, John Freeman uses a park as a petri dish, turning a deep gaze on all that pass through it. In language both precise and restrained, Freeman explores the inherent contradictions that arise from a place whose purpose is derived purely from what we bring to it--a park is both natural and constructed, exclusionary and open, unfeeling and burdened with sentimentality. Pulling from both history and his own meditations in the Luxembourg Gardens in Paris, the seasons pass through famous parks, personal parks, parks beneath parks, and other spaces with fabricated outer limits. Throughout, Freeman wonders at how a park, being both curated and public, can be a nexus for a manifestation of great wealth inequality. How have we created these false boundaries for ourselves--with regard to physical space, but also in our minds and societies, in our personal relationships? Freeman plucks out difference in small daily dramas of people and animals only to dissolve it. Interspersed with meditations on love, beauty, and connection, The Park is a pacific and unflinching mirror cast upon a space defined by its transience.

John Freeman is an American writer and literary critic. The former president of the National Book Critics Circle, Freeman is the editor of Freeman's, a literary biannual, author of two books of nonfiction, The Tyranny of E-mail and How to Read a Novelist, and of one book of poetry, Maps. Described by Dave Eggers as "one of the preeminent book people of our time," he has also edited two anthologies of writing on inequality, Tales of Two Cities and Tales of Two Americas. The former editor of Granta, he lives in New York, where he teaches at The New School and is Distinguished Writer-in Residence at New York University. The executive editor at LitHub, he has published poems in Zyzzyva, The New Yorker, The Paris Review, and The Nation. His work has been translated into more than twenty languages.