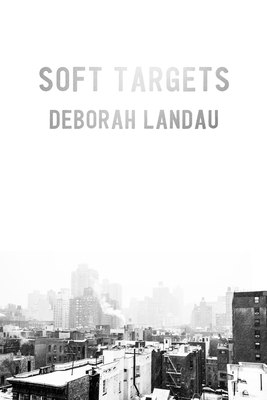 Starred Review in Publishers Weekly: Through the cadence of these poems, which sometimes resemble lullabies in their dreaminess and gorgeous lyricism, Landau captures the ways humans persist, despite our collective anxiety, in our longing for 'something tender, something that might bloom.'"
"...Terse and yet lyrical, floating in white space on the page like stark, intimate thoughts, Soft Targets is a riveting example of how we cannot take the body out of thinking, and we shouldn't." ―Lit Hub Deborah Landau's fourth book of poetry, Soft Targets, draws a bullseye on humanity's vulnerable flesh and corrupted world. In this ambitious lyric sequence, the speaker's fear of annihilation expands beyond the self to an imperiled planet on which all inhabitants are "soft targets." Her melancholic examinations recall life's uncanny ability to transform ordinary places--subways, cafes, street corners--into sites of intense significance that weigh heavily on the modern mind.
"O you who want to slaughter us, we'll be dead soon/enough what's the rush," Landau writes, contemplating a world beset by political tumult, random violence, terror attacks, and climate change. Still there are the ordinary and abundant pleasures of day-to-day living, though the tender exchanges of friendship and love play out against a backdrop of 21st century threats with historical echoes, as neo-Nazis marching in the United States recall her grandmother's flight from Nazi Germany.

Deborah Landau is the author of three collections of poetry: The Uses of the Body and The Last Usable Hour, both Lannan Literary Selections from Copper Canyon Press, and Orchidelirium, selected by Naomi Shihab Nye for the Robert Dana Anhinga Prize for Poetry. In 2016 she was awarded a Guggenheim Fellowship. The Uses of the Body was featured on NPR's All Things Considered, and included on "Best of 2015″ lists by The New Yorker, Vogue, BuzzFeed, and O, The Oprah Magazine, among others. Landau was educated at Stanford University, Columbia University, and Brown University, where she was a Javits Fellow and received a Ph.D. in English and American Literature. She teaches in and directs the Creative Writing Program at New York University, and lives in Brooklyn with her family.