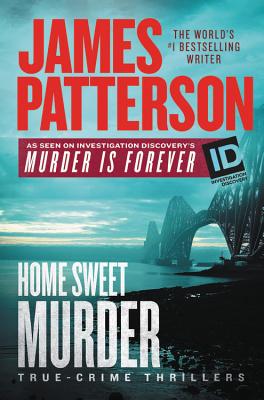 This is book number 2 in the ID True Crime series.

As seen on the Discovery ID TV series Murder is Forever, these two true-crime thrillers follow a lawyer struggling to stop a killer and a detective angling to solve a double homicide.
Home Sweet Murder (with Andrew Bourelle): Lawyer Leo Fisher and his wife Sue are a sixty-one-year-old couple enjoying a quiet Sunday dinner at home. Until a man in a suit rings their front door claiming to be an SEC agent. By the end of the evening, two people will be shot, stabbed, and tortured. And two others will fare worse . . .
Murder on the Run (with Scott Slaven): The middle-aged housekeeper found dead with a knife in her throat was bad. But the little boy was worse. After a bloody double homicide that puts Omaha, Nebraska, on the map, Detective Derek Mois promises the boy's parents he will catch the killer, no matter how long or far he runs . . .

James Patterson received the Literarian Award for Outstanding Service to the American Literary Community at the 2015 National Book Awards. Patterson holds the Guinness World Record for the most #1 New York Times bestsellers. His books have sold more than 355 million copies worldwide. He has donated more than one million books to students and soldiers and has over four hundred Teacher Education Scholarships at twenty-four colleges and universities. He has also donated millions to independent bookstores and school libraries.