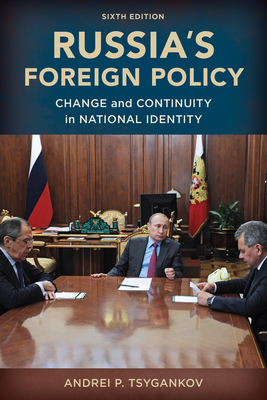 By Andrei P. Tsygankov
Click on "Ask A Bookseller" to contact us via email for more information about this title.

Now fully updated and revised, this clear and comprehensive text explores the past thirty years of Soviet/Russian international relations, comparing foreign policy formation under Gorbachev, Yeltsin, Medvedev, and Putin. Challenging conventional views of Moscow's foreign policy, Andrei Tsygankov shows that definitions of national interest depend on visions of national identity and is rooted both in history and domestic politics. Yet the author also highlights the role of the external environment in affecting the balance of power among competing domestic groups. Drawing on both Russian and Western sources, Tsygankov shows how Moscow's policies have shifted under different leaders' visions of Russia's national interests. He gives an overview of the ideas and pressures that motivated Russian foreign policy in six different periods: the Gorbachev era of the late 1980s, the liberal "Westernizers" era under Kozyrev in the early 1990s, the relatively hardline statist policy under Primakov, the more pragmatic course of limited cooperation under Putin and then Medvedev, and the assertive policy Putin has implemented since his return to power. Evaluating the successes and failures of Russia's foreign policies, Tsygankov explains its many turns as Russia's identity and interaction with the West have evolved. The book concludes with reflections on the emergence of the post-Western world and the challenges it presents to Russia's enduring quest for great-power status.

Andrei P. Tsygankov is professor in the Departments of Political Science and International Relations at San Francisco State University.