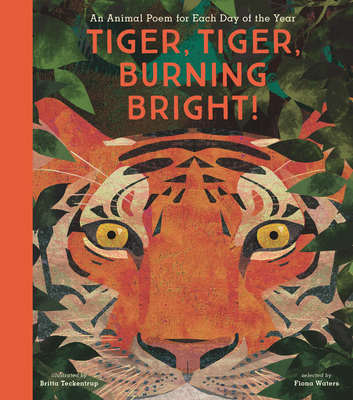 A lavishly illustrated collection of 366 animal poems—one for every day of the year! The perfect book for children (and grown-ups!) to share at the beginning or end of the day.

Tiger, Tiger, Burning Bright! is a lavishly illustrated collection of 366 animal poems—one for every day of the year. Filled with favorites and new discoveries written by a wide variety of poets, including William Blake, Christina Rosetti, Carl Sandburg, Grace Nichols, Matsuo Basho, Virginia Driving Hawk Sneve, Lewis Carroll, Emily Dickinson, and many more. This is the perfect book for children (and grown-ups!) to share at the beginning or end of the day.

Fiona Waters is renowned in the world of children’s books for her passion, enthusiasm, and encyclopedic knowledge of children’s literature. She has published more than eighty titles, including Sing a Song of Seasons, and her work has been translated into many different languages all over the world. Born and raised in Edinburgh, Fiona Waters now lives in the South of England with thousands of books and several very discerning cats.

Britta Teckentrup moved to London to study illustration and fine art and ended up staying in England for seventeen years. She has created more than thirty books, including Reptiles Everywhere, Don’t Wake Up the Tiger, and Get Out of My Bath! Her illustrations have appeared in magazines and on home wares, clothes, and packaging. Britta Teckentrup now lives and works in Berlin with her husband and son and their cat.

Attention parents and caregivers: You might have a new bedtime routine for 2022. . . . Waters has unearthed poems about an astounding range of creatures beyond William Blake’s famous tiger. . . Teckentrup’s luminous illustrations, which recall Eric Carle collages, will coax children to gaze, linger and let the lovely sound of the poetry sink in.
—The New York Times Book Review

All sorts of animals romp, crawl and soar through Britta Teckentrup’s stylish illustrations for ‘Tiger, Tiger, Burning Bright!’, a handsome 4.5-pound whopper of a book with a poem for every day of the year. . . Families with children ages 2-7 will get a lot of wear at bedtime out of this one.
—The Wall Street Journal

Britta Teckentrup's digital illustrations are both startling and gorgeous. The arresting tiger image on the cover stares right out at you from the jungle foliage, inviting you in.
—The Star Tribune

This gorgeous, massive volume is a sumptuous feast of pictures and poems, with spectacular full- and double-page artwork by Britta Teckentrup.
—The Buffalo News

So many beautiful books with lyrical texts were published this year, it’s hard to choose one as This Season’s Best. But we chose, anyway. Kudos to ‘Tiger, Tiger, Burning Bright,’ made of an animal poem for each day of the year, a big, lavishly-illustrated anthology. . . . The special thing about this 4.5-pound book is that it can be enjoyed by all ages.
—The St. Paul Pioneer Press

The forms of the poems run the gamut from free verse to haiku, and the tone varies from silly to solemn. The artwork, by Britta Teckentrup, is as vivid as the poems themselves. . . . Read this treasure cover to cover one poem at a time for the next year, or dip in and out, over and over.
—The Florida Times-Union

Sure to invite conversation and wonder.
—Book Riot