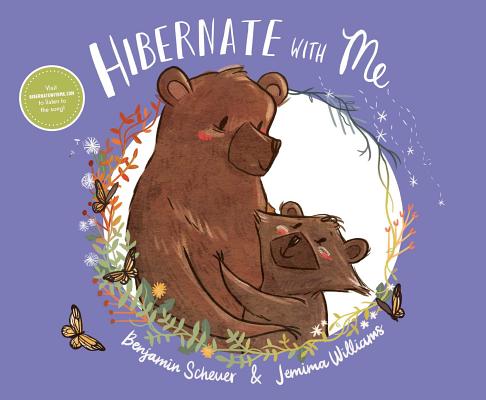 Based on the song of the same name by Benjamin Scheuer, Hibernate with Me is a gentle reminder that no matter how sad, small, or scared you feel, you are always worthy of love, and that brighter days are always ahead.

Sometimes you want nobody to see.
Darling, you can hibernate with me.

If you feel scared or lost, or even just a little shy, love means there will always be a place to hibernate together.

Benjamin Scheuer is a Drama Desk Award–winning singer-songwriter and playwright. He toured his solo show The Lion around the United States and Europe, giving more than five hundred performances. His album Songs from The Lion was released in 2016 (Warner/ADA) along with four animated music videos, which have been shown at film festivals around the world. With photographer Riya Lerner, Scheuer created the book Between Two Spaces, the proceeds of which raise funds for the Leukemia & Lymphoma Society. Scheuer lives in New York City with his wife, illustrator Jemima Williams, and their dog, Porthos.  Visit him online at BenjaminScheuer.com.

Jemima Williams is a British illustrator and writer who worked for nearly a decade on the BAFTA Award–winning animated show Peppa Pig. She illustrated Andy Nyman’s The Golden Rules of Acting and has been a frequent contributor of illustrations and writing to the online women’s magazine Standard Issue. Jemima lives in New York City with her husband, Benjamin Scheuer, and their dog, Porthos. Visit her online at JemimaWilliams.com.