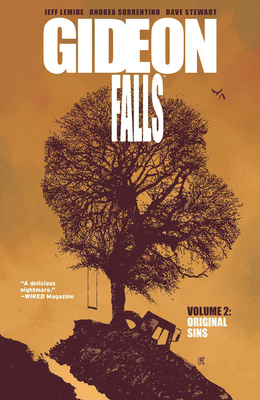 In the series that writer MARK MILLAR (HIT GIRL) called the best comic of 2018, rural mystery and urban horror collide in the second volume of the runaway best-selling series by JEFF LEMIRE and ANDREA SORRENTINO, the acclaimed creative duo behind Green Arrow and Old Man Logan. The lives of a reclusive young man obsessed with a conspiracy in the city's trash, and a washed up Catholic Priest arriving in a small town full of dark secrets become dangerously intertwined around the mysterious legend of The Black Barn -- an otherworldly building that is alleged to have appeared in both the city and the small town, throughout history, leaving death and madness in its wake. Collects GIDEON FALLS #7-11