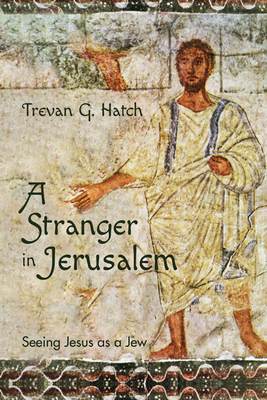 In A Stranger in Jerusalem, Trevan Hatch attempts to situate the stories about Jesus within their Jewish context. Jesus was a Jew, his friends were Jews, his first followers were Jews, he studied the Hebrew Scriptures (either orally or from texts), he worshiped in the synagogue, and he occasionally traveled to Jerusalem to observe the Israelite festivals. Hatch illustrates that Jesus does not seem to have rejected Judaism or acted as a radical outsider in relation to his Jewish peers, but rather he worked within a Jewish framework.

The overarching questions addressed in this book are (1) how can an understanding of early Judaism illuminate our understanding of the Jesus traditions, (2) how did Jesus relate to his Jewish world and vice versa, (3) why did the Gospel writers portray Jesus and his Jewish peers the way they did, and (4) how would Jews in the first and second centuries have interpreted the Jesus traditions upon hearing or reading them? Hatch explores several topics, including childhood and family life in first-century Galilee; Jewish notions of baptism and purity; Jewish prophets and miracle workers; Jewish ideas about the messiah; and Jesus' relationship with Judas, the Pharisees, the priestly establishment in Jerusalem, the Jewish populace, and his own disciples.

Trevan G. Hatch is the biblical studies and religious studies specialist in the Lee Library at Brigham Young University and is an adjunct instructor in the Department of Ancient Scripture. His formal training and primary expertise is in Jewish studies. Hatch is a coeditor with Leonard Greenspoon (Creighton) of the forthcoming volume, Divine Jealousy: What Latter-Day Saints Can Learn from Jews.