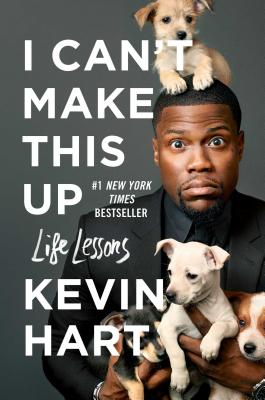 By Kevin Hart, Neil Strauss (With)
Email or call us for information about purchasing this item.
Not In Store / May Not Be Available To Order (email orders@greenlightbookstore.com for details)

Superstar comedian and Hollywood box office star Kevin Hart turns his immense talent to the written word by writing some words. Some of those words include: the, a, for, above, and even even. Put them together and you have the funniest, most heartfelt, and most inspirational memoir on survival, success, and the importance of believing in yourself since Old Yeller.

The question you’re probably asking yourself right now is: What does Kevin Hart have that a book also has?

According to the three people who have seen Kevin Hart and a book in the same room, the answer is clear:

A book has a beginning. Kevin Hart’s life uniquely qualifies him to write this book by also having a beginning.

The odds, in short, were stacked against our young hero, just like the odds that are stacked against the release of a new book in this era of social media (where Hart has a following of over 100 million, by the way).

But Kevin Hart, like Ernest Hemingway, JK Rowling, and Chocolate Droppa before him, was able to defy the odds and turn it around. In his literary debut, he takes the reader on a journey through what his life was, what it is today, and how he’s overcome each challenge to become the man he is today.

He achieved this not just through hard work, determination, and talent: It was through his unique way of looking at the world. Because just like a book has chapters, Hart sees life as a collection of chapters that each person gets to write for himself or herself.

“Not only do you get to choose how you interpret each chapter, but your interpretation writes the next chapter,” he says. “So why not choose the interpretation that serves your life the best?”

Kevin Hart is an award-winning actor and comedian. His films, including Kevin Hart: What Now?, Central Intelligence, Think Like a Man, Get Hard, Ride Along, The Wedding Ringer, and The Secret Life of Pets have earned over $3.5 billion at the box office. His stand-up comedy tours, including Let Me Explain, Laugh at My Pain, and What Now?, have sold out arenas and football stadiums, leading Forbes to name him the “king of comedy.” He is also the first comedian with a Nike sneaker line; a television producer, creating the BET show Real Husbands of Hollywood and the Laugh Out Loud Network; and CEO of Hartbeat Productions. Hart currently lives in Los Angeles with his family.

"[An] emotion-filled memoir full of grit and humor...Inspiring and thoroughly entertaining, Hart's memoir brings his readers into his hilarious universe of stories and philosophy."
— Publishers Weekly, starred review

"Hart is an incredibly magnetic storyteller, on the page as he is onstage, and that’s what shines through…a genial, entertaining guide to a life in comedy.”
— Kirkus Reviews