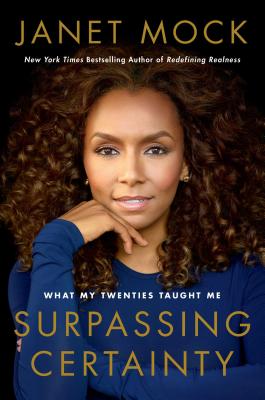 By Janet Mock
$24.99
Email orders@greenlightbookstore.com for information about this item.

Riveting, rousing, and utterly real, Surpassing Certainty is a portrait of a young woman searching for her purpose and place in the world—without a road map to guide her.

The journey begins a few months before her twentieth birthday. Janet Mock is adjusting to her days as a first-generation college student at the University of Hawaii and her nights as a dancer at a strip club. Finally content in her body, she vacillates between flaunting and concealing herself as she navigates dating and disclosure, sex and intimacy, and most important, letting herself be truly seen. Under the neon lights of Club Nu, Janet meets Troy, a yeoman stationed at Pearl Harbor naval base, who becomes her first. The pleasures and perils of their union serve as a backdrop for Janet’s progression through her early twenties with all the universal growing pains—falling in and out of love, living away from home, and figuring out what she wants to do with her life.

Despite her disadvantages, fueled by her dreams and inimitable drive, Janet makes her way through New York City while holding her truth close. She builds a career in the highly competitive world of magazine publishing—within the unique context of being trans, a woman, and a person of color.

Long before she became one of the world’s most respected media figures and lauded leaders for equality and justice, Janet was a girl taking the time she needed to just be—to learn how to advocate for herself before becoming an advocate for others. As you witness Janet’s slow-won success and painful failures, Surpassing Certainty will embolden you, shift the way you see others, and affirm your journey in search of self.

Janet Mock is a writer, TV host, and advocate tackling stigma through storytelling. With a Master’s in journalism from New York University, the Honolulu native began her career as an editor at People.com and went on to write cover stories for Marie Claire, Interview, and The Advocate as well as essays for The New Yorker, The New York Times, and Lenny. She produced HBO’s The Trans List, hosts the podcast Never Before, and serves as a columnist for Allure. Called a “fearless new voice” and “trailblazing leader” who “changed my way of thinking” by Oprah Winfrey, Janet was a featured speaker at the historic Women’s March on Washington. She is the author of Surpassing Certainty and the New York Times bestseller Redefining Realness. Find out more at JanetMock.com.

"Brimming with liberated self-discovery, Mock's conversational memoir is smoothly written with plenty of insight and personal perspective….A defining chronicle of strength and spirit particularly remarkable for younger readers, both in transition or questioning."
— Kirkus Reviews

"An honest and timely appraisal of what it means to be true to yourself."
— Booklist

"[Janet is] a teacher, a guide, a literary alchemist."
— Quartz

“Far too many assume that Janet Mock's story is primarily about her body. This book is irrefutable evidence that Janet must be understood through her intellect, spirit, and wit. Janet does what only great writers of autobiography accomplish—she tells a story of the self, which turns out to be a reflection of all humanity. You will be changed by this book.”
— Melissa Harris-Perry, Wake Forest University Professor

“Janet Mock is a glamorous, smarty-pants writer and activist…. Her book about her life as a transwoman, Redefining Realness, isn’t just a service to the trans community but to every woman – hell, person – who has struggled with identity.”
— Lena Dunham, actress and author of Not That Kind of Girl

“Redefining Realness is a riveting, emotional, crisply written testimony. I couldn't put it down. I aspire to be as unflinchingly brave! Janet Mock's story simultaneously embodies, complicates, and subverts the concept of American exceptionalism and self-creation.”
— Laverne Cox, actress, advocate, and star of Orange Is the New Black