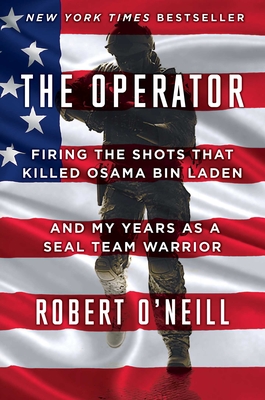 In The Operator, Robert O’Neill describes his idyllic childhood in Butte, Montana; his impulsive decision to join the SEALs; the arduous evaluation and training process; and the even tougher gauntlet he had to run to join the SEALs’ most elite unit. After officially becoming a SEAL, O’Neill would spend more than a decade in the most intense counterterror effort in US history. For extended periods, not a night passed without him and his small team recording multiple enemy kills—and though he was lucky enough to survive, several of the SEALs he’d trained with and fought beside never made it home.

“Impossible to put down…The Operator is unique, surprising, a kind of counternarrative, and certainly the other half of the story of one of the world’s most famous military operations…In the larger sense, this book is about…how to be human while in the very same moment dealing with death, destruction, combat” (Doug Stanton, New York Times bestselling author). O’Neill describes the nonstop action of his deployments in Iraq and Afghanistan, evokes the black humor of years-long combat, brings to vivid life the lethal efficiency of the military’s most selective units, and reveals details of the most celebrated terrorist takedown in history. This is “a riveting, unvarnished, and wholly unforgettable portrait of America’s most storied commandos at war” (Joby Warrick).

Robert O’Neill was born and raised in Butte, Montana, and lived there for nineteen years until he joined the Navy in 1996. Deploying as a SEAL more than a dozen times, O’Neill participated in more than four-hundred combat missions across four different theaters of war. During his remarkable career, he was decorated more than fifty-two times. Among the honors he received were two Silver Stars, four Bronze Stars with Valor, a Joint Service Commendation Medal with Valor, three Presidential Unit Citations, and a Navy/Marine Corps Commendation with Valor.

O’Neill helped cofound Your Grateful Nation, an organization committed to transitioning Special Operations veterans into their next successful career. You can find him at RobertJONeill.com.

"Harrowing . . . In frank and vivid detail and blunt and plain language, Mr. O'Neill describes some of the 400 counterterrorism operations and close quarter combat he experienced in Iraq, Afghanistan and elsewhere through his career as a SEAL . . . An interesting and insightful book about some of the most historic moments in modern American military history."
—Washington Times

"O'Neill absorbingly relates the 2011 attack on bin Laden's Pakistan compound . . . [Other] fascinating stories include his role in the successful 2009 mission to free Capt. Richard Phillips from Somali pirates, and those of too many fellow SEALs who were killed in battle. Fans of battlefield narratives, such as Michael Golembesky's Level Zero Heroes, will relish this gripping perspective on 21st-century warfare."
—Library Journal

“A riveting, unvarnished and wholly unforgettable portrait of America’s most storied commandos at war."
—Joby Warrick, author of Black Flags: The Rise of ISIS, winner of the 2016 Pulitzer Prize for General Nonfiction

“Intensely moving and awe-inspiring, The Operator captures as few other books have the essence of being a frogman: utterly unimaginable fatigue followed by intense exhilaration followed by a weary emptiness—and then back for more. As this book shows, SEALs regularly travel to an emotional place that few men will ever visit. O’Neill wrote himself into American history with the three shots he fired into Osama bin Laden, but if you think that operation was intense wait till you read about the ones that preceded it. There is a saying, ‘Great battles are only given to great warriors.’ Rob was repeatedly given great battles, and he represented accordingly.”
—Marcus Luttrell, New York Times bestselling coauthor of Lone Survivor and Service

“Impossible to put down . . . What O’Neill has written is unique, surprising, a kind of counternarrative, and certainly the other half of the story of one of the world’s most famous military operations . . . In the larger sense, this book is about how to be alive—how to be human while in the very same moment dealing with death, destruction, combat.”
—Doug Stanton, New York Times bestselling author of In Harm’s Way and Horse Soldiers