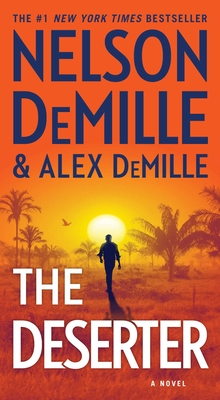 By Nelson DeMille, Alex DeMille
$9.99
Not In Store / Available To Order (allow for shipping time to bookstore or direct-to-home)

This instant New York Times bestseller and “outstanding” (Publishers Weekly, starred review) thriller features a brilliant and unorthodox Army investigator, his enigmatic female partner, and their hunt for the Army’s most notorious—and dangerous—deserter.

When Captain Kyle Mercer of the Army’s elite Delta Force disappeared from his post in Afghanistan, a video released by his Taliban captors made international headlines. But circumstances were murky: did Mercer desert before he was captured? Then a second video sent to Mercer’s Army commanders leaves no doubt: the trained assassin and keeper of classified Army intelligence has disappeared.

When Mercer is spotted a year later in Caracas, Venezuela, top military brass task Scott Brodie and Maggie Taylor of the Criminal Investigation Division to bring Mercer back to America—preferably alive. Brodie knows this is a difficult mission, made more difficult by his new partner’s inexperience, by their undeniable chemistry, and by Brodie’s suspicion that Maggie Taylor is reporting to the CIA.

With ripped-from-the-headlines appeal, an exotic and dangerous locale, and the hairpin twists and inimitable humor that are signature DeMille, The Deserter is the first in a timely and thrilling new series from an unbeatable team of True Masters: the #1 New York Times bestseller Nelson DeMille and his son, award-winning screenwriter Alex DeMille.

Nelson DeMille is the New York Times bestselling author of twenty-one novels, six of which were #1 New York Times bestsellers. His novels include The Deserter (written with Alex DeMille), The Cuban Affair, Word of Honor, Plum Island, The Charm School, The Gold Coast, and The General’s Daughter, which was made into a major motion picture, starring John Travolta and Madeleine Stowe. He has written short stories, book reviews, and articles for magazines and newspapers. Nelson DeMille is a combat-decorated US Army veteran, a member of Mensa, Poets & Writers, and the Authors Guild, and past president of the Mystery Writers of America. He is also a member of the International Thriller Writers, who honored him as 2015 ThrillerMaster of the Year. He lives on Long Island with his family.

Alex DeMille is a writer, director, and film editor. He grew up on Long Island and received a BA from Yale University and an MFA in film directing from UCLA. He has won multiple awards and fellowships for his screenplays and films, including The Absence, which was named Best Film at Comic-Con in 2012. He has edited numerous commercials, shorts, and independent feature films, among them My Nephew Emmett, which was nominated for an Academy Award for Best Live Action Short in 2018. He lives in Brooklyn with his wife and daughter. The Deserter is his debut novel.

PRAISE FOR THE DESERTER

“[O]utstanding...In typical DeMille fashion, the last hundred pages move along like a ballistic missile, exploding in a satisfying finale on a remote airstrip.  DeMille and son provide it all in this rumble Through the jungle – authentic detail, lively dialogue, a vividly drawn setting, and an exhilarating plot.”—PUBLISHERS WEEKLY, STARRED REVIEW

PRAISE FOR THE #1 NEW YORK TIMES BESTSELLER THE CUBAN AFFAIR

“[An] action-packed, relentlessly paced thriller… A line from the novel perfectly describes this page-turner: ‘Sex, money, and adventure. Does it get any better than that?’”
—Publishers Weekly (starred review)

“The Cuban Affair feels authentic and real, and it provides knuckle-white tension mixed in with levity."
—Associated Press

"The opening of The Cuban Affair is dynamite—crisp, funny and dramatic—and the climactic conclusion is masterful action writing, fast, precise and genuinely gripping."
—Newsday

"This is powerful, mythic stuff, like Confederate gold and Nazi treasure...As the true nature of the charter-boat owner’s job becomes clear and the betrayals begin, DeMille mounts a long, magnificent sequence with boat chases, helicopter rescues, and tracer fire. They’re all described in that visceral style the author has mastered."
—Booklist

"This book has that incredible wit that Nelson DeMille has, and nobody writes characters like Nelson does."
—Tampa Bay Times

“Nelson DeMille has outdone himself. I thought that Plum Island was one of my favorite thrillers of all time, but I was wrong—DeMille is always going up a gear and The Cuban Affair is going to be one of the top ten thrillers of the year.”
—Strand Magazine

“With his latest, The Cuban Affair, DeMille cements his reputation as an author of compelling, finely crafted and at times, humorous standalone thrillers. he Cuban Affair bursts with DeMille’s signature authenticity—a byproduct of DeMille’s passion for research.”
—The Big Thrill

"Ambitious...a masterpiece of both form and function. Storytelling at its very best."
—BookTrib

"Bestseller Nelson DeMille’s reputation precedes him, and his new novel delivers...This one will keep you on the edge of your seat."
—Bookish.com

"With his signature humor and heart-pounding pace, DeMille does not disappoint in this brilliantly written novel."
—Atlanta Jewish Times

“The thriller charts a satisfying course. A good day's work from an old pro.”
—Kirkus Reviews

"Nelson DeMille simply gets better every time he puts pen to paper. Maybe this time it has to do with a little help from Alex DeMille. I’m not sure if that’s true, but what I’m sure of is that it’s a blessing to have another DeMille with superb storytelling skills on the horizon. THE DESERTER will soar to the top of bestseller lists in record time, without any hesitation. It can’t fail. This book is absolutely stunning."
— Book Reporter