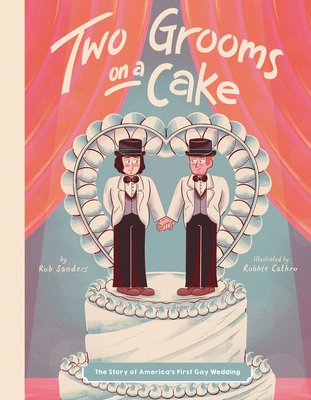 As seen on The TODAY Show!

"Sanders tells the tale in easy-to-understand language, sweet as the frosting on the cake. . . . As beautiful as it is informative about this little-known battle in the fight for equality." -Kirkus Reviews, STARRED REVIEW

"Their heartwarming story-accessible to young readers-demonstrates that the essential ingredient in a cake and a marriage is love. Cathro's affectionate illustrations-with vintage 1970s' colors and vibes-not only expand the text but also capture its sweet spirit exactly." -Booklist

This is the story of Jack Baker and Michael McConnell and their inspiring story becoming the first married gay couple in the US fifty years ago.

Long before marriage equality was the law of the land, two grooms stood on a wedding cake with their feet firmly planted in fluffy white frosting. That cake belonged to Jack Baker and Michael McConnell, who were wed on September 3, 1971, becoming the first same-sex couple in America to be legally married. Their struggle to obtain a marriage license in Minnesota and their subsequent appeals to the Minnesota Supreme Court and the Supreme Court of the United States is an under-told story of LGBT history. This beautiful book celebrates the love story of two pioneers of marriage equality for all through the baking of their wedding cake!

Rob Sanders is a picture book author, a writing teacher, a sometimes blogger, and a dog lover. He worked for fifteen years in religious educational publishing as a writer, editor, editorial manager, and product designer. These days, he teaches elementary school kids about books and words and reading and writing, and also writes books for those same kids.

Rob is the author of the nonfiction picture books The Fighting Infantryman: The Story of Albert D. J. Cashier, Transgender Civil War Soldier; Pride: The Story of Harvey Milk and the Rainbow Flag; Mayor Pete: The Story of Pete Buttigieg; Peaceful Fights for Equal Rights; and Stonewall: A Building. An Uprising. A Revolution. But he'll always write fiction too, including Rodzilla, Outer Space Bedtime Race, and Ball & Balloon.

Robbie Cathro is an illustrator and storyteller living in Bristol, UK, where he creates fun and lively work. He loves bright colors, limited palettes, atmospheric textures, and layered characters, all of which are inspired from the animation he loves, the folktales he reads, and the small stories you find in the corner of your day-to-day life. He loves nothing more than getting a brief that covers a subject from the other side of the world--whether that's the animals and inhabitants of Yosemite Park, Chinese inventors, Victorian ghosts, or girls being rescued from towers by giant owls.

The two groom figurines on the top of the cake at the first legal same-sex wedding celebration narrate the story of Jack and Michael, who met in 1966. The cake-topping grooms compare the creation of the cake they will stand on to the growing relationship of the couple and then to their struggle to get a marriage license, which includes law school, a name change (from Jack to the gender-neutral Pat), and a solo visit to City Hall for the license (for Michael). The cake is finished; the license is granted. Michael and Jack celebrate their wedding...but the battle for equality is far from over. Fifty years on, the couple is even more in love, and finally LGBTQ couples can marry in all 50 states. Sanders tells the tale in easy-to-understand language, sweet as the frosting on the cake, and leaves the bulk of the details for the comprehensive backmatter: author's note, marriage equality timeline, photographs of Jack and Michael as young and older men, and a well-rounded bibliography. Cathro's whimsical, retro-feeling illustrations on cream-colored paper show the cake toppers assisting in the creation of the cake as their human counterparts work for the right to marry. Both cake toppers and human grooms present White.

As beautiful as it is informative about this little-known battle in the fight for equality.
— Kirkus Reviews, STARRED REVIEW

Their heartwarming story-accessible to young readers-demonstrates that the essential ingredient in a cake and a marriage is love. Cathro's affectionate illustrations-with vintage 1970s' colors and vibes-not only expand the text but also capture its sweet spirit exactly.
— Booklist