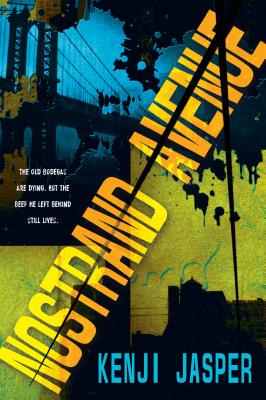 By Kenji Jasper
$15.95
Available In Store Now (while supplies last)

Jamison “Kango” Watts was once known as an invisible man, a quiet “fixer” who always got the job done with clean hands and cash in his pocket. Now he’s living the quiet life in DC, running a soul food restaurant and doing the occasional job to scratch his old itch. All that changes when Jelly, his old yoga teacher, blows into town with the ultimate score, one that will take Kango first to London and then back to Brooklyn to face old enemies and ghosts from his past. After a rain of gunfire, Kango’s retirement ends, and he’s back in the game.

Caught between a crew of arsonists who go after Brooklyn historical landmarks, and flashbacks of his time with the love of his life he lost to his own demons, Kango stands face to face with the forces that led him into exile.  But there is still an enemy in New York that Kango still doesn’t see, one who after fifteen years has become the unexpected foe at the center of it all . . .

“With Dark Kenji Jasper lays waste to the genteel façade of the Washington, D.C. where dignitaries skirt around the lives of those actually born in the city. From the first page Jasper guns the engine, whipping the reader from pole to pole.”
—Victor LaValle, author of The Changeling, on Dark

“The House on Childress Street is a deep meditation on family, love, and remembrance, and a tough valentine to the real Washington, D.C. Kenji Jasper is an extraordinary young talent.”
—George Pelecanos, award-winning writer and producer

Kenji Jasper is a regular contributor to National Public Radio. His work has appeared in Essence®, Vibe, The Source, and many other publications. The author of the memoir The House on Childress Street, and the novels Seeking Salamanca Mitchell, Dakota Grand, and Dark, he is a Morehouse College graduate. He lives in New York.