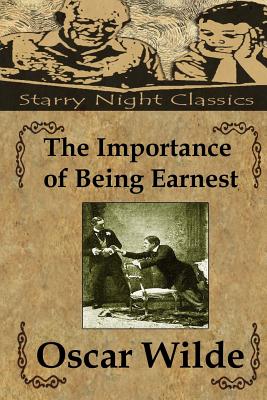 Join us for Irish author Oscar Wilde's most famous classic play, and possibly the most famous of all farcical comedies ever written. This is a witty and ingenious case of mistaken identity poking fun at the seriousness of society, and focusing on the main character's fictitious brother in Victorian England.

Oscar Fingal O'Flahertie Wills Wilde was born on October 16, 1854 in Dublin, Ireland, the second of three children. His father was the leading ear and eye surgeon and was knighted in 1864. He was also a writer and had three children from other women. Oscar was educated at home by two different governesses, learning French and German. In 1871, he left to attend Trinity College, Dublin, sharing a room with his older brother. There he took an interest in Greek literature, becoming an outstanding student and winning a scholarship to Magdalen College, Oxford. It was there that he began to exhibit eccentric behavior, growing his hair long and decorating his room lavishly. After graduation from Oxford, he returned to Dublin and became engaged to Florence Balcombe, but she married Bram Stoker in 1878. In 1882, Wilde went on a lecture tour of North America. Meant to last four months, it went on for more than a year due to its popularity. In 1884, Oscar married Constance Lloyd and they had two sons. In 1887, he had an affair with a man named Robert Ross. In 1890, Wilde published one of his most famous works, "The Picture of Dorian Gray." As 1892 neared, Wilde headed for Paris and began writing plays, the most famous of which was, "The Importance of Being Earnest," in 1895. During that time, the Marquess of Queensberry began a public battle with Wilde, accusing him of being a homosexual, which at that time was a serious crime. Found guilty, he was sentenced to two years hard labor. Used to "the good life," Wilde soon became very ill. He was released in 1897 and took the name Sebastian Melmoth. His wife refused to allow him to see his sons, although she did supply him with money. He died on November 30, 1900, at the age of 46, from meningitis, in Paris, France. He was buried in the Bagneux Cemetery, near Paris.