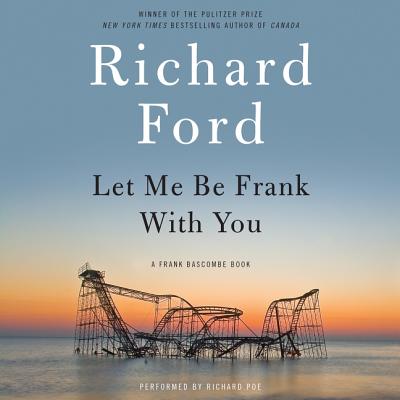 By Richard Ford, Richard Poe (Read by)
Click on "Ask A Bookseller" to contact us via email for more information about this title.
Not In Store / May Not Be Available To Order (email orders@greenlightbookstore.com for details)

A brilliant new work that returns Richard Ford to the celebrated fictional landscape that sealed his reputation as an American master: the world of Frank Bascombe

In his trio of critically acclaimed, bestselling novels--The Sportswriter, the Pulitzer Prize and PEN/ Faulkner-winning Independence Day, and The Lay of the Land--Richard Ford, in essence, illuminated the zeitgeist of an entire generation, through the divinings and wit of his now-famous literary chronicler, Frank Bascombe, who is certainly one of the most indelible, provocative, and anticipated characters in modern American literature.

Here, in Let Me Be Frank With You, Ford returns with four deftly linked stories narrated by the iconic Bascombe. Now sixty-eight, and again ensconced in the well-defended New Jersey suburb of Haddam, Bascombe has thrived--seemingly if not utterly--in the aftermath of Hurricane Sandy's devastation. As in all of the Bascombe books, Ford's guiding spirit is the old comic's maxim that promises if nothing's funny, nothing's truly serious. The desolation of Sandy, which rendered houses, shorelines, and countless lives unmoored and flattened, could scarcely be more serious as the grist for fiction. Yet it is the perfect backdrop and touchstone for Ford--and Bascombe. With a flawless comedic sensibility and unblinking intelligence, these stories range over the full complement of American subjects: aging, race, loss, faith, marriage, redemption, the real-estate crash--the tumult of the world we live in.

Through Bascombe--wry, profane, touching, wise, and often inappropriate--we engage in the aspirations and sorrows, longings, achievements, and failings of American life in the morning of the new century. With his trademark candor and brimming wit, Richard Ford brings Bascombe fully back, in all his imperfect glory, to say (often hilariously) what all of us are thinking but few will voice aloud.

Whether you've been a Bascombe insider since The Sportswriter or are encountering Ford's unforgettable inventions newly here, Let Me Be Frank With You is a moving, wondrous, extremely funny odyssey, showcasing the maturity and brilliance of a great writer working at the top of his talents.