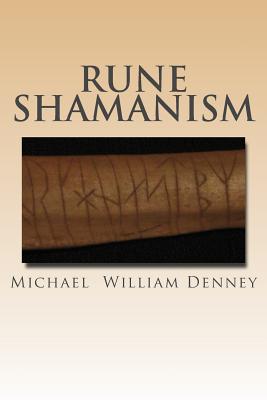 Runes have been used for divination and writing in Europe for thousands of years. But where did they come from? Modern academia tells us that the Runic alphabet was adopted 2200 years ago. But could they be older than that?... Perhaps much, MUCH older? In this book, author Michael William Denney closely examines the historical and linguistic mysteries of the Runic alphabet known as the "Elder Futhark." But, this isn't just another re-hashing of the same old academic questions about Rune stave meanings. Mr. Denney reveals a powerful, ancient method of Rune Shamanism, a FORGOTTEN method of Rune galdor that may have been the original method of Rune magic taught in secret from father to son during the ice ages when the early Germanic tribes were differentiating themselves from their other Indo-European cousins. "Rune Shamanism" reveals a powerful method of spiritual transformation available to all modern seekers of ancient shamanic wisdom.

Michael William Denney has been researching, practicing and teaching animist (shamanic) disciplines from around the globe for over 20 years. He has authored three books: "The Thunder Wizard Path," "Shamanism for 'White' People" and "Wealth Shaman" as well as a fourth book, "Awakening Sleipnir - Reviving European Polytheist Animism" which will be released soon. He has also released numerous instructional DVDs in meditation and animism as well as numerous CDs in World Music. Mr. Denney currently teaches Teutonic (Germanic) animism, Taoist internal martial arts and mysticism, qigong, Vedic mantra and mysticism, meditation and West African animist drumming. For more info go to: www.ThunderWizard.com