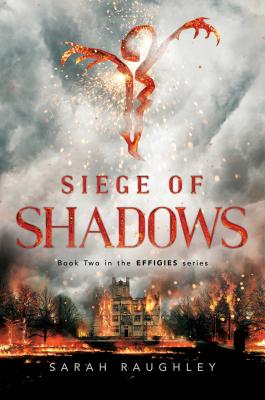 This is book number 2 in the The Effigies series.

The Effigies seek out the true origins of the Phantoms that terrorize their world in this thrilling follow-up to Fate of Flames, which Elise Chapman calls “an immersive and monstrously fun read.”

Not when you’re an Effigy. No matter where they go, Maia and the other Effigies can’t escape the eyes of the press—especially not after failing to capture Saul, whose power to control the monstrous Phantoms has left the world in a state of panic. It’s been two months since Saul’s disappearance, and there’s still no sign of him, leaving the public to wonder whether the Sect—and the Effigies—are capable of protecting anyone.

When Saul suddenly surfaces in the middle of the Sahara desert, the Sect sends Maia and her friends out after him. But instead of Saul, they discover a dying soldier engineered with Effigy-like abilities. Even worse, there may be more soldiers like him out there, and it looks like the Effigies are their prime targets.

Yet the looming danger of Saul and this mysterious new army doesn’t overshadow Maia’s fear of the Sect, who ordered the death of the previous Fire Effigy, Natalya. With enemies on all sides and the world turning against them, the Effigies have to put their trust in each other—easier said than done when secrets threaten to tear them apart.

Sarah Raughley grew up in Southern Ontario writing stories about freakish little girls with powers because she secretly wanted to be one. She is a huge fangirl of anything from manga to sci-fi fantasy TV to Japanese role-playing games and other geeky things, all of which have largely inspired her writing. Sarah has been nominated for the Aurora Award for Best YA Novel and works in the community doing writing workshops for youths and adults. On top of being a YA writer, Sarah has a PhD in English, which makes her a doctor, so it turns out she didn’t have to go to medical school after all. As an academic, Sarah has taught undergraduate courses and acted as a postdoctoral fellow. Her research concerns representations of race and gender in popular media culture, youth culture, and postcolonialism. She has written and edited articles in political, cultural, and academic publications. She continues to use her voice for good. You can find her online at SarahRaughley.com.