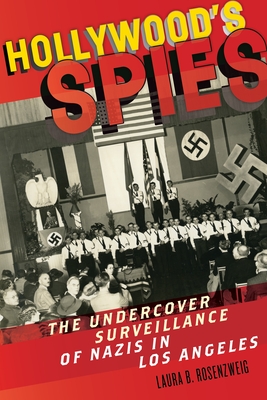 Tells the remarkable story of the Jewish moguls in Hollywood who established the first anti-Nazi Jewish resistance organization in the country in the 1930s In April 1939, Warner Brothers studios released the first Hollywood film to confront the Nazi threat in the United States. Confessions of a Nazi Spy, starring Edward G. Robinson, told the story of German agents in New York City working to overthrow the U.S. government. The film alerted Americans to the dangers of Nazism at home and encouraged them to defend against it. Confessions of a Nazi Spy may have been the first cinematic shot fired by Hollywood against Nazis in America, but it by no means marked the political awakening of the film industry's Jewish executives to the problem. Hollywood's Spies tells the remarkable story of the Jewish moguls in Hollywood who paid private investigators to infiltrate Nazi groups operating in Los Angeles, establishing the first anti-Nazi Jewish resistance organization in the country--the Los Angeles Jewish Community Committee (LAJCC). Drawing on more than 15,000 pages of archival documents, Laura B. Rosenzweig offers a compelling narrative illuminating the role that Jewish Americans played in combating insurgent Nazism in the United States in the 1930s. Forced undercover by the anti-Semitic climate of the decade, the LAJCC partnered with organizations whose Americanism was unimpeachable, such as the American Legion, to channel information regarding seditious Nazi plots to Congress, the Justice Department, the FBI and the Los Angeles Police Department. Hollywood's Spies corrects the decades-long belief that American Jews lacked the political organization and leadership to assert their political interests during this period in our history and reveals that the LAJCC was one of many covert "fact finding" operations funded by Jewish Americans designed to root out Nazism in the United States.