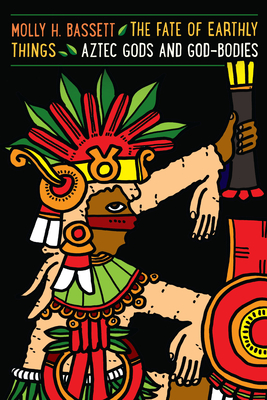 Following their first contact in 1519, accounts of Aztecs identifying Spaniards as gods proliferated. But what exactly did the Aztecs mean by a “god” (teotl), and how could human beings become gods or take on godlike properties? This sophisticated, interdisciplinary study analyzes three concepts that are foundational to Aztec religion—teotl (god), teixiptla (localized embodiment of a god), and tlaquimilolli (sacred bundles containing precious objects)—to shed new light on the Aztec understanding of how spiritual beings take on form and agency in the material world.

In The Fate of Earthly Things, Molly Bassett draws on ethnographic fieldwork, linguistic analyses, visual culture, and ritual studies to explore what ritual practices such as human sacrifice and the manufacture of deity embodiments (including humans who became gods), material effigies, and sacred bundles meant to the Aztecs. She analyzes the Aztec belief that wearing the flayed skin of a sacrificial victim during a sacred rite could transform a priest into an embodiment of a god or goddess, as well as how figurines and sacred bundles could become localized embodiments of gods. Without arguing for unbroken continuity between the Aztecs and modern speakers of Nahuatl, Bassett also describes contemporary rituals in which indigenous Mexicans who preserve costumbres (traditions) incorporate totiotzin (gods) made from paper into their daily lives. This research allows us to understand a religious imagination that found life in death and believed that deity embodiments became animate through the ritual binding of blood, skin, and bone.

MOLLY H. BASSETT is Assistant Professor of Religious Studies at Georgia State University in Atlanta and a research affiliate with the Zacatecas Institute for Teaching and Research in Ethnology (IDIEZ) in Zacatecas, Mexico.