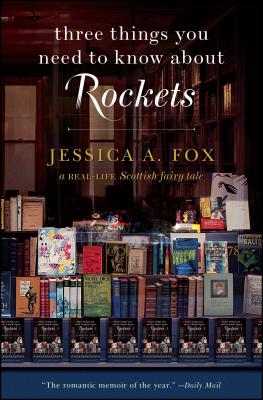 By Jessica A. Fox
$23.99
Available at our distributor; usually ships in 1-5 days

In this inspiring, delightful memoir, a young woman decides to escape the daily grind and turn her “what if” fantasy into a reality, only to find work—and a man—she loves in one fell swoop, all in a secondhand bookstore in a quaint Scottish town.

Jessica Fox was living in Hollywood, an ambitious 26-year-old film-maker with a high-stress job at NASA. Working late one night, craving another life, she was seized by a moment of inspiration and tapped “second hand bookshop Scotland” into Google. She clicked the first link she saw.

A month later, she arrived 2,000 miles across the Atlantic in Wigtown, on the west coast of Scotland, and knocked on the door of the bookshop she would be living in for the next month . . .

The rollercoaster journey that ensued—taking in Scottish Hanukkah, yoga on Galloway’s west coast, and a waxing that she will never forget—would both break and mend her heart. It would also teach her that sometimes we must have the courage to travel the path less taken. Only then can we truly become the writers of our own stories.

Jessica Fox is a writer and film director. She has consulted for HarperCollins and was a resident storyteller and film director at NASA. She heads Mythic Image Studios and divides her time between the US and the UK. This is her first book.

“The romantic memoir of the year.”
— Daily Mail