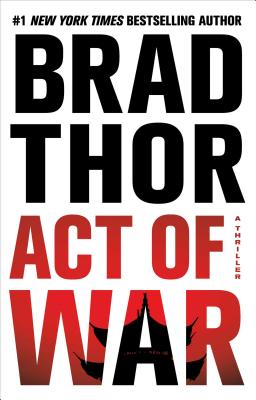 This is book number 14 in the The Scot Harvath Series series.

After a CIA agent mysteriously dies overseas, his top asset surfaces with a startling and terrifying claim. There’s just one problem—no one knows if she can be trusted.

But when six exchange students go missing, two airplane passengers trade places, and one political-asylum seeker is arrested, a deadly chain of events is set in motion.

With the United States facing an imminent and devastating attack, America’s new president must turn to covert counterterrorism operative Scot Harvath to help carry out two of the most dangerous operations in the country’s history.

Code-named "Gold Dust" and "Blackbird," they are shrouded in absolute secrecy as either of them, if discovered, will constitute an act of war.

"From Hong Kong to America to China and North Korea,with Navy SEALS and Al Qaeda on board, the reader will never be able to take abreath while enjoying Brad Thor’s wild ride!"
— Suspense Magazine

"ACT OF WAR will keep you up at night."
— BookReporter.com

“It's top-speed beach-read stuff – and the action is riveting.”
— The Day

“Prepare for an all-nighter!”
— Watch! Magazine

“From Hong Kong to America to China and North Korea, with Navy SEALS and Al Qaeda on board, the reader will never be able to take a breath while enjoying Brad Thor’s wild ride!”
— Suspense Magazine

“Thor’s most ambitious, prescient and wondrously realized book yet reads like the best of James Bond sprinkled with just enough of a Vince Flynn’s Mitch Rapp-like edge…a thinking man’s thriller quilted in an action-adventure fabric that’s Thor at his very best.”
— Providence Journal

“For those missing Jack Bauer and his 24 exploits, Harvath provides a page-turning alternative with a no-matter-what determination and ‘Heck yeah, America!’ patriotic machismo.”
— USA Today

“With Act of War, Brad Thor has taken over the throne left vacant by Tom Clancy as the undisputed king of the military thriller.”
— BestThrillers.com