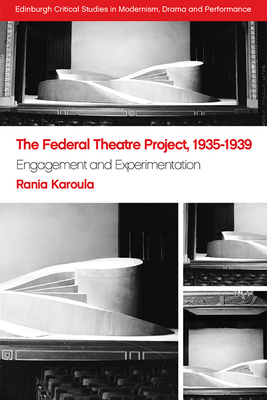 By Rania Karoula
$105.00
Email orders@greenlightbookstore.com for information about this item.

Engaging and informative, this book presents a comparative study of the history, performances and politics of the FTP by drawing and exposing further links between American modernism and its European counterparts. It concentrates predominantly on the New York division and its following units: the Living Newspaper, the Negro unit, the Children's unit and the Dance unit. Exploring a range of performances, it suggests that the FTP is responsible for an array of theatrical and dramatic experimentations but that it is also indebted to and carries on from the tradition of the European avant-garde and the contemporary modernist theatrical explorations.

Rania Karoula teaches contemporary Scottish and modernist drama in the Department of English Literature and Centre for Open Learning at the University of Edinburgh. In addition to her work in libraries and archives, she interned at Oran Mor, Glasgow, with David MacLennan, one of the founders of the 7:84 company. She has organized theatrical workshops with leading Scottish and international dramatists, performers, academics and musicians. Her recent article, "From Meyerhold and Blue Blouse to McGrath and 7:84: Political Theatre in Russia and Scotland", was considered for the 2019 R. D. S. Jack Prize by the International Society for the Study of Scottish Literatures.