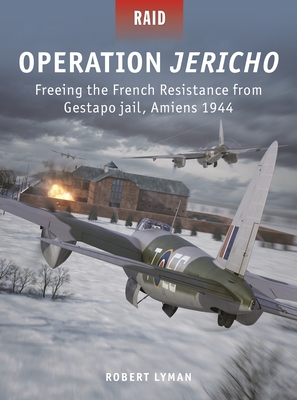 This is the story of Operation Jericho, the spectacular prison break staged by an elite group of British, Australian and New Zealand bomber pilots, who flew a daring low-level mission to blow holes in the walls of Amiens jail and free French Resistance prisoners under the sentence of death during World War II.

With D-Day looming, early 1944 was a time of massive intelligence activity across northern France, and many résistants were being captured and imprisoned by the Germans. Among the jails full of French agents was Amiens, where hundreds awaited likely execution for their activities.

To repay their debt of honour, MI6 requested an air raid with a seemingly impossible brief: to simultaneously blow holes in the prison walls, free as many men and women as possible while minimizing casualties, and kill German guards in their quarters. The crews would have to fly their bomb-run at an altitude of just 20ft. Despite the huge difficulties, the RAF decided that the low-level specialists of No. 140 Wing had a chance of success.

With the aid of first-hand accounts, explanatory 3D diagrams and dramatic original artwork, the eminent historian Robert Lyman explains how one of the most difficult and spectacular air raids of World War II was pulled off, and debunks some of the myths over why the raid was ordered in the first place.

Robert Lyman is regarded as one of Britain's most talented military historians, with 15 best-selling works of history published and numerous television appearances including on the BBC's 'Who Do You Think You Are?' and on two episodes of the 'Great Escapes' documentary series, on Tobruk (1941) and Kohima (1944). He spent 20 years in the British Army and is an elected Fellow of the Royal Historical Society. A frequent traveller to the US, Asia and Australasia, he lives in England.

Adam Tooby is an internationally renowned digital artist and illustrator. His work can be found in publications worldwide and as box art for model aircraft kits. He also runs a successful illustration studio and aviation prints business. He is based in Cheshire, UK. To buy artwork, or contact the artist, visit http://www.adamtooby.com/.

"...it includes some marvellous 3D diagrams clearly showing the flightpaths of the various aircraft over the prison site." - Robin Buckland, Military Model Scene