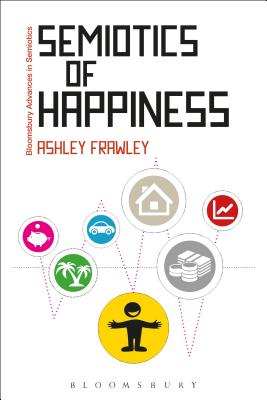 By Ashley Frawley
Click on "Ask A Bookseller" to contact us via email for more information about this title.

The Semiotics of Happiness examines the rise of 'happiness' (and its various satellite terminologies) as a social and political semiotic, exploring its origins in the US and subsequent spread into the UK and across the globe.

The research takes as its starting point the development of discussions about happiness in UK newspapers in which dedicated advocates began to claim that anew 'science of happiness' had been discovered and argued for social and political change on its behalf. Through an in-depth analysis of the written and visual rhetoric and subsequent activities of these influential 'claims-makers', Frawley argues that happiness became a serious political issue not because of a growing unhappiness in society nor a demand 'on the ground' for new knowledge about it, but rather because influential and dedicated 'insiders' took the issue on at a cultural moment when problems cast in emotional terms were particularly likely to make an impact.

Emerging from the analysis is the observation that, while apparently positive and light-hearted, the concern with happiness implicitly affirms a 'vulnerability' model of human functioning, encourages a morality of low expectations, and in spite of the radical language used to describe it, is ultimately conservative and ideally suited to an era of 'no alternative' (to capitalism).