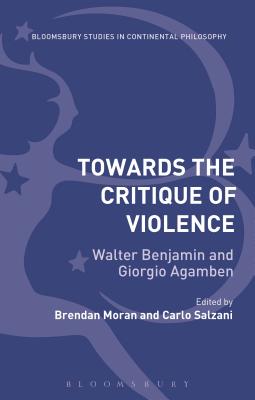 By Brendan Moran (Editor), Carlo Salzani (Editor)
Click on "Ask A Bookseller" to contact us via email for more information about this title.

In the past two and a half decades, Walter Benjamin's early essay 'Towards the Critique of Violence' (1921) has taken a central place in politico-philosophic debates. The complexity and perhaps even the occasional obscurity of Benjamin's text have undoubtedly contributed to the diversity, conflict, and richness of contemporary readings. Interest has heightened following the attention that philosophers such as Jacques Derrida and Giorgio Agamben have devoted to it. Agamben's own interest started early in his career with his 1970 essay, 'On the Limits of Violence', and Benjamin's essay continues to be a fundamental reference in Agamben's work.

Written by internationally recognized scholars, Towards the Critique of Violence is the first book to explore politico-philosophic implications of Benjamin's 'Critique of Violence' and correlative implications of Benjamin's resonance in Agamben's writings. Topics of this collection include mythic violence, the techniques of non-violent conflict resolution, ambiguity, destiny or fate, decision and nature, and the relation between justice and thinking. The volume explores Agamben's usage of certain Benjaminian themes, such as Judaism and law, bare life, sacrifice, and Kantian experience, culminating with the English translation of Agamben's 'On the Limits of Violence'.